Aretha Franklin died, aged seventy-six at her home in Detro 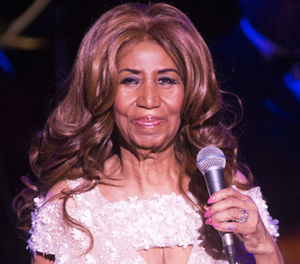 In 2014, Aretha Franklin was signed under RCA Records, controller of the Arista catalog and a sister label to Columbia via Sony Music Entertainment, and was working with Clive Davis. An album was planned with producers Babyface and Danger Mouse. In September 2014, Aretha Franklin performed to a standing ovation, with Cissy Houston as backup, a compilation of Adele's "Rolling in the Deep" and "Ain't No Mountain High Enough" on the Late Show with David Letterman. Aretha Franklin's cover of "Rolling in the Deep" was featured among nine other songs in her first RCA release, Aretha Aretha Franklin Sings the Great Diva Classics, released in October 2014. In doing this, she became the first woman to have 100 songs on Billboard's Hot Rythm & Blues/Hip-Hop Songs chart with the success of her cover of Adele's "Rolling in the Deep", which debuted at number forty-seven on the chart.
In December 2015, Aretha Franklin gave an acclaimed performance of "You Make Me Feel Like A Natural Woman" at the 2015 Kennedy Center Honors during the section for honoree Carole King, who co-wrote the song. During the bridge of the song, Aretha Franklin dropped her fur coat to the stage, for which the audience rewarded her with a mid-performance standing ovation. She returned to Detroit's Ford Field on Thanksgiving Day 2016 to once again perform the national anthem before the game between the Minnesota Vikings and Detroit Lions. Seated behind the piano, wearing a black fur coat and Lions stocking cap, Aretha Franklin gave a rendition of "The Star-Spangled Banner" that lasted more than four minutes and featured a host of improvizations. Aretha Franklin released the album A Brand New Me in November 2017 with the Royal Philharmonic Orchestra.