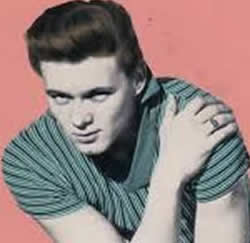 83. Billy had collapsed from a heart attack at his home in London after returning from a recording session in the early hours of 28th January 1983. His manager Tony Read found him unconscious the next morning. He was taken to St Mary's Hospital in Paddington, London. U.K. but died later in the afternoon. A week later a funeral service was held at the St John's Wood church in London, for which his body was embalmed. Among the mourners were Larry Parnes, Marty Wilde, Jess Conrad, Eden Kane, Tony Read, Hal Carter and Mick Green, in addition to family members, friends and fans. The choir sang a special version of Billy's Decca hit "I'm Lost Without You". After the service Billy Fury's body was buried at Mill Hill cemetery, in North London.

Billy Fury was born Ronald Wycherley on 17th April 1940 in Liverpool, United Kingdom. He commenced music lessons on the piano before he was a teenager, and was bought his first guitar by the age of fourteen. Billy Fury fronted his own group in nineteen-fifty-five, but simultaneously worked full-time on a tugboat and later as a docker. He entered and won a talent competition, and by 1958 had started composing his own songs. Billy Fury first went to meet Larry Parnes at the Essoldo Theatre in Birkenhead, in the hope of interesting famous singer Marty Wilde in some of the songs he had written. Instead, in an episode that has become pop music legend, Parnes pushed young Billy Fury up on stage right away. He was such an immediate success that Parnes signed him, added him to the tour, and renamed him 'Billy Fury'. However, his early sexual and provocative stage performances received censure, and he was forced to tone them down. In October nineteen-fifty-nine, the UK music magazine, NewMusicalExpress, commented that Fury's stage antics had been drawing much press criticism.
He released his first hit single for Decca, "Maybe Tomorrow", in nineteen-fifty-nine. He also appeared in a televised play Strictly for Sparrows, and subsequently on Oh Boy! In March nineteen-sixty, he reached Number 9 in the UK Singles Chart with his own composition "Colette", followed by "That's Love" and his first long-playing-record The Sound of Fury (nineteen-sixty), which featured a young Joe Brown on lead guitar, with backup vocals by the Four Jays.
After securing more hits and jettisoning his band Georgie Fame and the Blue Flames, Parnes held auditions in Liverpool for a new group. Among those who auditioned were the Beatles, who at this time were still calling themselves the Silver Beetles. They were offered the job for £20 a week on condition that they sacked their bassist Stuart Sutcliffe. John Lennon refused and the band left after Lennon had secured Fury's autograph. The Tornados were recruited as Fury's backing band and toured and recorded with him from January 1962 to August 1963. The Puppets were another band that backed Billy on a couple of gigs for twelve months.
Billy Fury concentrated less on rock and roll and more on mainstream ballads, such as "Halfway to Paradise" and "Jealousy" (which reached Number 3 and Number 2 respectively in the UK Singles Chart in 1961). Billy Fury confessed to the NewMusicalExpress that he wanted people to think of him simply as a singer – and not, more specifically, as a rock singer. He continued that he was growing up, and he wanted to broaden his scope and he would continue to sing rock songs, but at the same time his stage act was not going to be as wild in the future. It was Decca's decision to mould Fury into a teen idol after his last self-penned song, "My Christmas Prayer", had failed to chart. The years 1961 through to 1963 were Billy Fury's best years chartwise. In 1962 Billy Fury appeared in his first film, 'Play It Cool', modelled on the Elvis films. It featured Helen Shapiro, Danny Williams, Shane Fenton and Bobby Vee, who appeared with the Vernons Girls. The hit single from the film was "Once Upon a Dream". There were other notable performances by several British actors and performers such as Richard Wattis, Lionel Blair and Dennis Price.
Billy Fury's 'We Want Billy'! was one of the first live long-playing-records in UK rock history and featured renditions of his hits and cover versions of several Rythm and Blues songs such as "Unchain My Heart".
In nineteen-sixty-five he appeared in the film I've Gotta Horse, which also featured his backing group the Gamblers, the Bachelors, Amanda Barrie, Michael Medwin and Jon Pertwee. The long-playing-record from the film was made available in stereo. Billy Fury left Decca Records in Nineteen-Sixty-Six, after signing to a five-year recording contract with Parlophone.
Having had more UK hits, such as "It's Only Make Believe" and "I Will" (written by Dick Glasser, not to be confused with the Paul McCartney song), both in 1964, and "In Thoughts of You" (nineteen-sixty-five), Billy Fury began a lengthy absence from the charts in 1967, and underwent surgery for heart problems in 1972 and 1976 which led to his abandoning touring. Despite spending many weeks on the charts, Billy Fury never achieved a number one single, but he remained popular even after his hits stopped. "I Will" became a US hit for Dean Martin (nineteen-sixty-five) and for Ruby Winters in nineteen-seventy-seven.

In NineteenSeventyThree, Billy Fury emerged from a period of semi-retirement to star as 'Stormy Tempest' in the film That'll Be the Day. Also starring David Essex and Ringo Starr, it was roughly based on the early days of the Beatles. Starr was from the Dingle area of Liverpool as was also Billy Fury, and had originally played drums for Rory Storm & the Hurricanes, whom the Stormy Tempest group were said to be modelled upon.
In the mid-Nineteen-Seventies Billy Fury went out on the road with Marty Wilde. Away from the spotlight, he focused on wildlife preservation. Billy Fury's healt 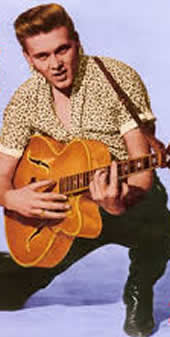 h deteriorated and he underwent two open heart surgeries - the first was in 1972, and the second in 1976. In 1978 he was declared bankrupt for unpaid taxes from the Inland Revenue. The unpaid taxes were dated back to 1962, and amounted to £16,780. He was also forced to sign over his royalties and publishing income. A new release, "Be Mine Tonight" , failed to make an appearance in the UK Singles Chart. Worse was to follow in March 1981 when Billy Fury, working on his own farm, collapsed and almost perished. He returned to touring later that year and his next two singles, "Love or Money" and "Devil or Angel", just dented the UK chart. In 1981 and 1982, Billy Fury was signed to Polydor Records by A&R man Frank Neilson and recorded a comeback long-playing-record, The One and Only (released posthumously) with Shakin' Stevens' producer Stuart Colman. Owing to his health, Fury did little touring to promote the new long-playing-record. His last public appearance was at the Sunnyside, Northampton, on 4th December 1982. Billy Fury recorded a live performance for the television show, Unforgettable, featuring six of his old hits although, at the request of his mother.
Billy Fury lived with Lee Middleton from nineteen-fifty-nine to 1967. During this time, he had a short relationship with actress Amanda Barrie, his co-star in I've Gotta Horse.
He married Judith Hall in May 1969, but later left her for heiress Lisa Voice. They lived together in London and sometimes on Billy Fury's farm in Wales, from 1971 until his death although they were leading separate lives for the last two years. Billy Fury was a keen birdwatcher.

Do you like this website? If so, then please copy and email the link:   http://www.rockapaedia.com   to your friends, colleagues and aquaintances. Thankyou.