Dan Fogelberg died at the age of fifty-six on sixteenth 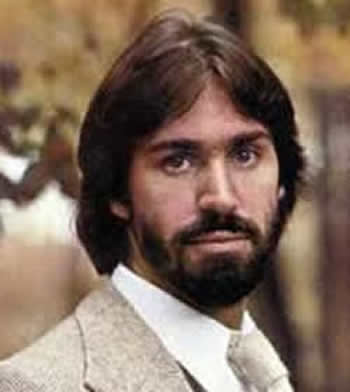 December 2007 at home in Nederland, Colorado, U.S.A. His ashes were scattered into the Atlantic Ocean.
Dan was married three times: to Maggie Slaymaker, a dancer from Nashville, from 1982 to 1985; to Anastasia Savage, a nurse and artist from Louisiana, from 1991 to 1996; and to musician Jean Marie Mayer, from April 2002, until his death. He had no children by any of his marriages.
For 25 years Dan lived in Maine, on Deer Isle, overlooking Eggemoggin Reach.
In May 2004, he was diagnosed with advanced prostate cancer. After undergoing therapy, his cancer went into partial remission. On 13th August 2005, his 54th birthday, Dan Fogelberg announced the success of his cancer treatments. However, his cancer returned.
Dan Fogelberg's widow announced that a song written and recorded by Dan for her, for Valentine's Day 2005, "Sometimes a Song", would be sold on the Internet and that all proceeds would go to the Prostate Cancer Foundation. The song was released on Valentine's Day 2008 and was also included on a CD released in September 2009 entitled Love in Time, a collection of eleven previously unpublished songs.
Dan Fogelberg, the youngest of three sons, was born in Peoria, Illinois, the son of Margaret, a classically trained pianist, and Lawrence Peter Fogelberg, a high school band director who spent most of his career at Peoria's Woodruff High School and Pekin High School. Dan's mother was a Scottish immigrant, and his father was of Swedish descent. His father would later be the inspiration for the song "Leader of the Band". Using a Mel Bay course book, Dan taught himself to play a Hawaiian slide guitar that his grand-father gave him. He also learned to play the piano. At age fourteen he joined a band, The Clan, which covered Beatles songs. His second band was another cover band, The Coachmen, who, in 1967, released two singles written by Dan Fogelberg. They were cut at Golden Voice Recording studio in South Pekin, Illinois, and released on Ledger Record's label. They were: "Maybe Time Will Let Me Forget" and "Don't Want to Lose Her".
After graduating from Woodruff High School in 1969, Dan Fogelberg studied theater arts and painting at the University of Illinois at Urbana-Champaign while playing local venues with a folk-rock band, The Ship. He began performing as a solo acoustic player in area cafes. One of these included the Red Herring, which is where he made his first solo recordings as part of a folk festival in 1971. He was discovered by Irving Azoff, who started his music management career promoting another Champaign-Urbana act, REO Speedwagon. Azoff sent Dan to Nashville, Tennessee, to hone his skills. There he became a session musician and recorded his first album with producer Norbert Putnam. In 1972, Dan Fogelberg released his debut album Home Free to lukewarm response, although it eventually reached platinum status. He performed as an opening act for Van Morrison.
Dan Fogelberg's second effort was more successful – the 1974 Joe Walsh-produced album 'Souvenirs'. The song "Part of the Plan" became Dan Fogelberg's first hit. After Souvenirs, he released a string of gold and platinum albums, including Captured Angel and Nether Lands . His 1978 Twin Sons of Different Mothers was the first of two collaborations with jazz flautist Tim Weisberg, which found commercial success with songs such as "The Power of Gold". Phoenix, from 1979, reached the top 10, with "Longer" becoming a number-2 pop hit and wedding standard in 1980. The track peaked at number 59 on the UK Singles Chart. The album reached number 42 on the UK Albums Chart. It was followed by a Top 20 hit "Heart Hotels".
The Innocent Age, released in October 1981, was Dan Fogelberg's critical and commercial peak. The double album included four of his biggest hits: "Same Old Lang Syne", "Hard to Say", "Leader of the Band", and "Run for the Roses". He drew inspiration for The Innocent Age from Thomas Wolfe's novel Of Time and the River. A 1982 greatest hits album contained two new songs, both of which were released as singles: "Missing You" and "Make Love Stay." In 1984, he released th

e album Windows and Walls, containing the singles "The Language of Love" and "Believe in Me."
Dan Fogelberg released High Country Snows in 1985. Recorded in Nashville, it showcased his and some of the industry's best talent in bluegrass. Vince Gill, Ricky Skaggs, Doc Watson, Jerry Douglas, David Grisman, Chris Hillman, and Herb Pedersen contributed to the record. In a world he defined as "life in the fast lane", Dan Fogelberg described the music as "life in the off-ramp". In late 1985, he switched gears and took to the road with a group of musician friends, including Joe Vitale, Tom Chaffee, Jeff Grossberg and Rick Rosas, playing blues in small clubs throughout Colorado as Frankie and the Aliens, covering songs by Cream and Muddy Waters, among others. 1987 heralded a return to rock with Exiles, an album that contained "What You're Doing", a throwback to the old Stax Records sound made famous in Memphis during the 1960s. The Wild Places, an album whose theme was the preservation of nature, was released in 1990 followed by a tour. His live Greetings From The West album, and full-length concert film of the same name, was released in 1991.
River of Souls, released in 1993, was Dan Fogelberg's last studio album for Sony Records. In 1997, the box set Portrait encompassed his career with four discs, each highlighting a different facet of his music: "Ballads", "Rock and Roll", "Tales and Travels", and "Hits". In 1999, he released a Christmas album, The First Christmas Morning, and in 2003, Full Circle showcased a return to the folk-influenced 1970s soft rock style of music.