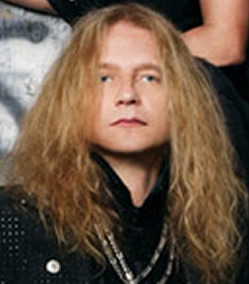 Donald Ean Evans died aged forty-eight on 6th May 2009, at his home in Columbus, Mississippi, U.S.A. He was survived by his wife Eva and their two daughters, Sydney and Andrea. Some months after he had been diagnosed with lung cancer, Donald Ean Evans had performed with Lynard Skynyrd one last time while sitting in a chair at the Mississippi Kid Festival, which was organized in support of him.

Ean Evans was born and raised in Atlanta, Georgia, U.S.A.. He moved to Columbus, Mississippi, after marrying his wife, Eva. He started in music at the age of five, playing trumpet and having an orchestral background until his teen years. Picking up the guitar at fifteen, soon he was playing the southeastern rock circuit with various cover groups.

A few years later he switched to bass so as to bring a fellow guitarist into the band. In the 1980s he played bass for a rock band called "Five Miles High", along with Mike Reynolds (drummer), Reuban Lace (guitarist), Carl Brown (keyboardist), Del Stockstill (guitar). The group played venues from Georgia to Kentucky and all over the south east U.S.A..

Around 1983 Five Miles High disbanded, and Ean returned to his native Atlanta, Georgia. There he welcomed his newborn daughter and worked on plans to form a new group with close friend keyboardist, Joey Huffman. This project quickly became the band, "Babe Blu" (with former FMH members Carl Brown, Reuban Lace, and adding JT Williams on drums). Babe Blu immediately become a top draw in Atlanta, and on the southeastern club and college circuit. However, in 1987, Ean left Babe Blu permanently to be home with his young family, and to work on his own original compositions.

In 1988, Ean was picked up by his then personal manager, Jay Jay French of the then recently disbanded Twisted Sister. Ean Evans formed his first original band "Cupid's Arrow". They became quite popular in the Atlanta area. After composing and recording over 50 songs, Ean became a full-time studio musician.
It was during this time he was called to join the Outlaws by leader Hughie Thomasson, who showed him worldwide touring experience. The Outlaws stopped touring when Hughie was called to join Lynyrd Skynyrd.

In 1997, Ean Evans and ex-Halloween guitarist Rick Craig formed "Noon", which blends metal with southern rock. They released one album in 2002 and many other unreleased recordings exist and are subject to release.
Following the death of Lynyrd Skynyrd bassist Leon Wilkeson, the call came to Ean to continue on for his fallen friend. He joined Lynyrd Skynyrd in August 2001, in Las Vegas, Nevada, beginning his own chapter with the band.