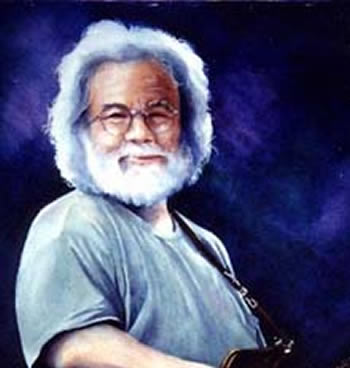 remarking that "there are some kinds of ideas that would really throw me if I had to create a harmonic bridge between all the things going on rhythmically with two drums and Phil's innovative bass playing. Weir's ability to solve that sort of problem is extraordinary. Harmonically, I take a lot of my solo cues from Bob."
When asked to describe his approach to soloing, Jerry commented: "It keeps on changing. I still basically revolve around the melody and the way it's broken up into phrases as I perceive them. With most solos, I tend to play something that phrases the way the melody does; my phrases may be more dense or have different value, but they'll occur in the same places in the song.
Jerry Garcia and the band toured almost constantly from their formation in 1965 until Jerry's death in 1995. Periodically, there were breaks due to exhaustion or health problems, often due to unstable health and/or Jerry's drug use. During their three-decade span, the Grateful Dead played 2,314 shows.
Jerry Garcia's guitar-playing was eclectic. He melded elements from the various kinds of music that influenced him. Echoes of bluegrass playing could be heard. But the "roots music" behind bluegrass had its influence, too, and melodic riffs from Celtic fiddle jigs can be distinguished. There was also early rock , contemporary blues , country and western , and jazz to be heard in Jerry Garcia's style.
Jerry Garcia's style could vary with the song being played and the instrument he was using, but his playing had a number of so-called "signatures". Among these were lead lines based on rhythmic triplets (examples include the songs "Good Morning Little School Girl", "New Speedway Boogie", "Brokedown Palace", "Deal", "Loser", "Truckin'", "That's It for the Other One", "U.S. Blues", "Sugaree", and "Don't Ease Me In"). Another signature to his style was a poignant, almost pleading quality of musical gesture that, especially in extended solos could evolve into disparate and unpredictable emotional regions such as anxiety, anger, or triumph. This tremendous breadth of emotional expression – between songs or even within a piece – accounts for a great deal of his reputation as a guitarist.
<<go to top>>