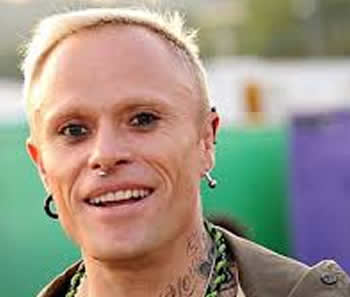 Keith Flint died aged forty-nine from hanging on 4th March 2019 at his home in Essex, United Kingdom, one month after his final public performance with the Prodigy which was on 5th February 2019 at the Trusts Arena in Auckland, New Zealand. He was survived by his Japanese wife Mayumi.

Keith was born Keith Charles Flint in Redbridge, London, on 17th September 1969 and was initially raised in East London but in the mid-1970s his parents moved out to a quiet suburban cul-de-sac in Springfield, Essex.

His childhood has been described as unhappy and he feuded with his parents, who parted when he was young. He attended the Boswells School in Chelmsford and moved to Braintree after leaving school. Keith Flint was described as being a "bright boy with dyslexia" and was disruptive in class.

He was expelled from school at the age of fifteen and then worked as a roofer and later enthusiastically embraced the acid-house scene of the late 1980's.


In 1996, just before the release of the Prodigy’s third album, Keith Flint moved from being a dancer for the group to being its frontman

when he performed vocals on the hit single "Firestarter", the accompanying video showcasing Keith Flint's new and soon-to-be iconic punk look. This trend continued with the next Prodigy single "Breathe", on which Keith Flint sang lead vocals.

The 1997 album 'The Fat of the Land' featured Keith Flint's vocal contributions to several tracks, namely "Breathe", "Serial Thrilla", "Fuel My Fire" and "Firestarter". In 2002, the single "Baby's Got a Temper" was released. Keith Flint did not perform vocals on the next Prodigy album, Always Outnumbered, Never Outgunned in 2004, although he did appear on the "Hotride – El Batori Mix", on the "Hotride" single.

song: 'Breath' by The Prodigy