Mickey Gee Died aged sixty-four on 21st January 2009 from emphysema at University Hospital Cardiff, Wales, United Kingdom. Mickey was born in Cardiff and his early guitaring influences were Scotty Moore and Chet Atkins and at age eighteen he went to Nashville and Memphis in America hoping to meet his heroes. Mickey worked in New York - on a working visa - but speedily retreated when he received draft papers for the US Army. 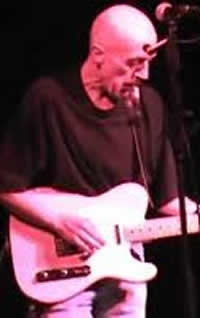 Early in his career Mickey Gee was the musical director of The Senators, Tom Jones' backing band when Tom Jones was still known as Tommy Scott. Mickey soon after left and joined Joe Cocker's Grease Band.   Later in the nineteen-sixties, he played alongside Dave Edmunds and close friend, bassist John David Williams, in the band Human Beans. His relationship with Dave Edmunds continued for many years playing on several of his records, most notably on his multi-million selling number one single "I Hear You Knocking" in 1970.
Mickey also teamed up with drummer Rob (Congo) Jones and bassist/vocalist Eddie Williams to form the band Arthur Mellow in the 1960s. This trio produced some outstanding music and were highly thought of by fellow musicians. Congo went on to work with Dave Edmunds in Love Sculpture, spent time with Sassafras and toured with Budgie.
During the 1980s, Mickey Gee became a member of Shakin' Stevens' backing band adding lead guitar to the number one singles This Ole House, Green Door and Oh Julie. Mickey Gee's distinctive playing style was much in demand during the 1980s. Mickey Gee's band Memphis Bend regularly supported Carl Perkins on Uk tours which led to Mickey Gee becoming part of Carl Perkins' star studded backing band in 1985, which, along with Dave Edmunds, also included George Harrison, Ringo Starr and Eric Clapton for his "Blue Suede Shoes: A Rockabilly Session". During the same year, Mickey Gee was involved in Bill Wyman's Willie and the Poor Boys project which also featured Charlie Watts and Jimmy Page.
Mickey Gee provided the soundtrack of the 1997 film 'Twin Town' and was still performing regularly until not long before his death..

music: Micky And The G Strings at the Royal Oak Cardiff