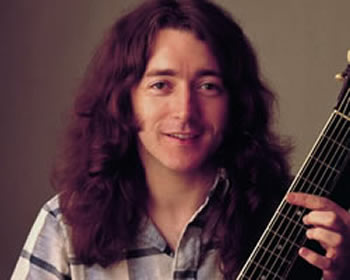 orty-seven. He was unmarried and had no children.
Rory was buried in St Oliver's Cemetery, on the Clash Road just outside Ballincollig near Cork City, Ireland. His headstone is a replica of an award he received in 1972 for International Guitarist of the Year.
In the later years of his life Rory Gallagher developed a phobia of flying. To overcome this he received a prescription for a powerful sedative. This medication, combined with his alcohol use resulted in severe liver damage. Despite this he continued touring. By the time of his final performance on 10th January 1995 in the Netherlands, he was visibly ill and the tour had to be cancelled. Rory was admitted to King's College Hospital in London in March 1995, and it was only then that the extent of his ill-health became apparent: his liver was failing and the doctors determined that in spite of his young age a liver transplant was the only possible course of action. After thirteen weeks in intensive care, while waiting to be transferred to a convalescent home, his health suddenly worsened when he contracted a staphylococcal (MRSA) infection, and died.

Rory Gallagher was born in Ballyshannon, County Donegal in 1948. His father Daniel was employed by the Irish Electricity Supply Board. The family moved, first to Derry City, where his younger brother Dónal was born in 1949.
His mother, Monica, and the two boys then moved to Cork, where the brothers were raised. Rory attended North Monastery School. Daniel Gallagher had played the accordion and sang with the Tír Chonaill Céilí Band while in Donegal; their mother Monica was a singer and acted with the Abbey Players in Ballyshannon. The Theatre in Ballyshannon where Monica once acted is now called the Rory Gallagher Theatre.
Both sons were musically inclined and encouraged by their parents. At age nine, Rory Gallagher received his first guitar from them. He built on his burgeoning ability on ukulele in teaching himself to play the guitar and perform at minor functions. After winning a talent contest when he was twelve, Rory began performing in his adolescence with both his acoustic guitar, and an electric guitar he bought with his prize money. However, it was a 1961 Fender Stratocaster, which he purchased three years later for £100, that became his primary instrument and was most associated with him during his career. Rory was initially attracted to skiffle after hearing Lonnie Donegan on the radio. He relied entirely on radio programs and television. Occasionally, the BBC would play some blues numbers, and he slowly found some song books for guitar, where he found the names of the actual composers of blues pieces.
While still in school, playing songs by Buddy Holly and Eddie Cochran, Rory discovered his greatest influence in Muddy Waters. He began experimenting with folk, blues, and rock music. Unable to find or afford record albums, Rory stayed up late to hear Radio Luxembourg and AFN where the radio brought him his only exposure to the actual songwriters and musicians whose music moved him most.
Influences he discovered, and cited as he progressed, included Woody Guthrie, Big Bill Broonzy, and Lead Belly. Initially, Rory Gallagher struck out after just an acoustic sound. Singing and later using a brace for his harmonica, Rory taught himself to play slide guitar. Further, throughout the next few years of his musical development, he began learning to play alto saxophone, bass, mandolin, banjo, and the coral sitar with varying degrees of proficiency. By his mid-teens, he began experimenting heavily with different blues styles.
Rory Gallagher began playing after school with Irish showbands, while still a young teenager. In 1963, he joined one named Fontana, a sextet playing the popular hit songs of the day. The band toured Ireland and the United Kingdom, earning the money for the payments that were due on his Stratocaster guitar. Rory Gallagher began to influence the band's repertoire, beginning its transition from mainstream pop music, skirting along some of Chuck Berry's songs and by 1965, he had successfully moulded Fontana into "The Impact", with a change in their line-up into an R&B group that played gigs in Ireland and Spain until disbanding in London. Rory Gallagher left with the bassist Oliver Tobin and drummer to perform as a trio in Hamburg, Germany. In 1966, Rory returned to Ireland and, experimenting with other musicians back home in Cork, decided to form his own band.
Having completed a musical apprenticeship in the showbands, and influenced by the increasing popularity of beat groups during the early 1960s, Rory formed "The Taste", which was later renamed simply, "Taste", a blues rock and R&B power trio, in 1966. Initially, the band was composed of Rory Gallagher and two Cork mu

sicians, Eric Kitteringham and Norman Damery. However, by 1968, they were replaced with two musicians from Belfast, featuring Rory on guitar and vocals, drummer John Wilson, and bassist Richard McCracken.
Performing extensively in the UK, the group played regularly at the Marquee Club, supporting both Cream at their Royal Albert Hall farewell concert, and the blues supergroup Blind Faith on a tour of North America. Managed by Eddie Kennedy, the trio released the albums Taste and On The Boards, and two live recordings, Live Taste and Live at the Isle of Wight.
After the break-up of Taste, Rory Gallagher toured under his own name, hiring former Deep Joy bass player Gerry McAvoy to play on his self-titled debut album, Rory Gallagher.
It was the beginning of a twenty-year musical relationship between Rory and McAvoy; the other band member was drummer Wilgar Campbell. The 1970s were Gallagher's most prolific period. He produced ten albums in that decade, including two live albums, Live in Europe and Irish Tour '74. November 1971 saw the release of the album Deuce.
In the same year he was voted Melody Maker's International Top Guitarist of the Year, ahead of Eric Clapton.
Rory Gallagher played and recorded what he said was "in me all the time, and not just something I turn on ...". Though he sold over thirty million albums worldwide, it was his marathon live performances that won him greatest acclaim. He is documented in Irish Tour '74, a film directed by Tony Palmer.
During the heightened periods of political unrest in Northern Ireland, as other artists were warned not to tour, Rory Gallagher was resolute about touring Ireland at least once a year during his career, winning him the dedication of thousands of fans, and in the process, becoming a role model for other aspiring young Irish musicians.
Other releases from that period include Against the Grain, Calling Card, Photo-Finish, and Top Priority.
Along with Little Feat and Roger McGuinn, Gallagher performed the first Rockpalast live concert at the Grugahalle, Essen, Germany in 1977.
Rory Gallagher collaborated with Jerry Lee Lewis and Muddy Waters on their respective London Sessions in the mid-1970s and he played on Lonnie Donegan's final album.
In the 1980s Rory continued recording, producing Jinx, Defender, and Fresh Evidence. After Fresh Evidence, he embarked on a tour of the United States.

Do you like this website? If so, then please copy and email the link:http://www.rockapaedia.com
to your friends, colleagues and aquaintances. Thankyou.