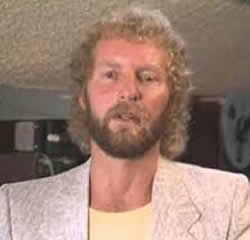 Tom Fogerty died at the age of forty-eight on 6th September 1990 in Scottsdale, Arizona, U.S.A. where he lived. He had suffered back problems in the nineteen-eighties and surgery for this including a blood transfusion is thought to have given him the HIV infection which made him succeptible to Tubercullosis and his eventual death. His remains were cremated and his ashes were passed on to his wife.

Tom was born Thomas Richard Fogerty in Berkeley, California, U.S.A on 9th November nineteen-forty-one. His father was Galen Fogerty who came from South Dakota, U.S.A and worked for the Berkeley Gazette as a Linotype operator. His mother was Edith Licile Fogerty who originated from Great Falls, Montana, U.S.A.

Tom started singing rock and roll when in high school. He and his younger brother, John, had separate groups. Tom's band, Spider Webb and the Insects, signed a recording contract with Del-Fi Records but broke up in 1959 before releasing any records. The Blue Velvets, a group led by John, began backing Tom. Eventually Tom joined the band, and the group recorded three singles, with Tom on lead vocals, for Orchestra Records in nineteen sixty-one and nineteen sixty-two. By the mid nineteen sixties, the band had been renamed 'The Golliwogs' and were recording with Fantasy Records. In nineteen sixty-eight the band was again renamed to 'Creedence Clearwater Revival' by which time John Fogerty had become the full-time lead singer and main songwriter. During the few years of the life of Creedence Clearwater Revival, Tom sang backing vocals and wrote songs, but only one of his songs ("Walking on the Water") was put on a record. This lack of ou

tlet for his songwriting as-well-as mutual hostility with his brother, catalysed Tom's departure from the band in nineteen seventy-one.

After leaving Creedence Clearwater Revival, Tom Fogerty began performing and recording as a solo artist. He had minor hits with "Goodbye Media Man" and others and remained with Fantasy Records. His nineteen seventy-one solo debut album, 'Tom Fogerty', reached number seventy-eight on the Billboard Hot 200 chart. On the follow-up, 'Excalibur', Jerry Garcia and Merl Saunders played on the sessions. Stu Cook and Doug Clifford (Creedence Clearwater Revival's former bass guitarist and drummer) and John Fogerty performed on the 1974 follow-up album, 'Zephyr Nationa'l. The song "Mystic Isle Avalon" features a complete reunion of Creedence Clearwater Revival though John Fogerty recorded his parts separately. Cook and Clifford also backed Tom on his second LP release of 1974 entitled 'Myopia'.
Throughout the remainder of the nineteen seventies and nineteen eighties, Tom Fogerty continued to record and claimed all royalties but sued Fantasy Records. Later, he re-signed with Fantasy

In October nineteen eighty, Tom Fogerty married Tricia Clapper and at the reception all four members of Creedence Clearwater Revival reunited for their penultimate performance. They took to the stage one more time at a school reunion three years after. Tom Fogerty lived in Scottsdale, Arizona for the remainder of his life. He was an occasional surprise call-in guest on local radio station KSLX-FM.
After his death, a music compilation entitled 'The Very Best of Tom Fogerty' was released.

Do you like this website? If so, then please copy and email the link: http://www.rockapaedia.com
to your friends, colleagues and aquaintances. Thankyou.

song 'Walk on The Water' by Creedence Clearwater Revival