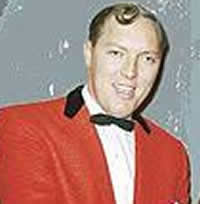 n of Harlingen, Texas. U.S.A. Bill had made his final performances in South Africa in 1980 after which he was diagnosed with a brain tumor, and a planned tour of Germany in the autumn of 1980 was cancelled.
After he'd been jailed by the Harlingen Police for drunken behaviour, Bill's wife Martha had the judge put him in hospital where he was seen by a psychiatrist who said Bill's brain was overproducing a chemical, like adrenaline. The doctor prescribed a medication to stop the overproduction but said Bill would have to stop drinking. Martha took him home, , fed him and gave him his first dose. As soon as he felt better, he went back out to his room in the pool house and his downward spiral continued until his death.
Bill Haley was posthumously inducted into the Rock and Roll Hall of Fame in 1987 when his son Pedro represented him at the ceremony.
Bill Haley was born William John Clifton Haley on 6th July 1925 in Highland Park, Michigan, U.S.A. He is credited by many with first popularizing rock and roll music in the early 1950s with his group Bill Haley & His Comets and million-selling hits such as "Rock Around the Clock", "See You Later, Alligator", "Shake, Rattle and Roll", "Rocket 88", "Skinny Minnie", and "Razzle Dazzle". He has sold over twenty-five million records worldwide. In 1929, the four-year-old Bill Haley underwent an inner-ear mastoid operation which accidentally severed an optic nerve, leaving him blind in his left eye for the rest of his life. As a result of the effects of the Great Depression on the Detroit area, his father moved the family to Bethel, Pennsylvania, when Bill was seven years old. His father William Albert Haley was from Kentucky and played the banjo and mandolin, and his mother, Maude Green, who was originally from Ulverston in Lancashire, England, was a technically accomplished keyboardist with classical training. Bill Haley told the story that when he made a simulated guitar out of cardboard, his parents bought him a real one.
One of Bill Haley's first appearances was in nineteen-thirty-eight for a Bethel Junior baseball team entertainment event, performing guitar and songs when he was thirteen years old.
The anonymous sleeve notes accompanying the 1956 Decca album Rock Around The Clock describe Bill Haley's early life and career: "When Bill Haley was fifteen he left home with his guitar and very little else and set out on the hard road to fame and fortune. He worked at an open-air park show, sang and yodelled with any band that would have him, and worked with a traveling medicine show. Eventually he got a job with a popular group known as the "Down Homers" while they were in Hartford, Connecticut. Soon after this he decided, as all successful people must decide at some time or another, to be his own boss again – and he had been that ever since. .
During the Labor Day weekend in 1952, the Saddlemen were renamed Bill Haley with Haley's Comets a name suggested by a WPWA radio station program director where Bill Haley had a live radio program, and in 1953, Bill Haley's recording of "Crazy Man, Crazy" (co-written by him and his bass player, Marshall Lytle, became the first rock and roll song to hit the American charts, peaking at number fifteen on Billboard and number eleven on Cash Box. Soon after, the band's name was revised to Bill Haley & His Comets.
In 1953, "Rock Around the Clock" was recorded by Bill Haley. Initially, it was relatively successful, peaking at number 23 on the Billboard pop singles chart and staying on the charts for a few weeks. A month later it re-entered at number one.
Bill Haley soon had another worldwide hit with "Shake, Rattle and Roll", which went on to sell a million copies and was the first rock 'n' roll song to enter the British singles charts in December 1954, becoming a gold record. He retained elements of the original (which was slow blues), but sped it up with some country music aspects into the song, specifically, Western swing, and altered the lyrics. Bill Haley and his band were important in launching the music known as "Rock and Roll" to a wider audience after a period of it being considered an underground genre.
When "Rock Around the Clock" appeared as the theme song of the 1955 film Blackboard Jungle starring Glenn Ford, it soared to the top of the American Billboard chart for eight weeks. The single is commonly used as a convenient line of demarcation between the "rock era" and the music industry that preceded it. Billboard separated its statistical tabulations into 1890–1954 and 1955–present. After the record rose to number one, Bill Haley was quickly given the title "Father of Rock and Roll" by the media, and by teenagers who had come to embrace the new style of music. With the song's success, the age of rock music began ove

rnight and ended the dominance of the jazz and pop standards performed by Frank Sinatra, Jo Stafford, Perry Como, Bing Crosby, and others.
"Rock Around the Clock" was the first record to sell over one million copies in both Britain and Germany. Later on in 1957, Bill Haley became the first major American rock singer to tour Europe. Bill Haley continued to score hits throughout the 1950s such as "See You Later, Alligator" and he starred in the first rock and roll musical films Rock Around the Clock and Don't Knock the Rock, both in 1956. Bill Haley was already 30 years old, so he was soon eclipsed in the United States by the younger and sexier Elvis Presley, but continued to enjoy great popularity in Latin America, Europe, and Australia during the 1960s.
Bill Haley and the Comets were the first rock and roll act to appear on the iconic American musical variety series the Ed Sullivan Show on Sunday, 7th August 1955, on CBS in a broadcast that originated from the Shakespeare Festival Theater in Hartford, Connecticut. They performed a live version of "Rock Around the Clock" with Franny Beecher on lead guitar and Dick Richards on drums. The band made their second appearance on the show on Sunday, 28th April 1957, performing the songs "Rudy's Rock" and "Forty Cups of Coffee".
Bill Haley was married three times: to Dorothy, Barbara and Martha and fathered ten children. John W. Haley, his eldest son, wrote Sound and Glory, a biography of Bill Haley. His youngest daughter, Gina Haley, is a professional musician based in Texas. Scott Haley is an athlete. His youngest son Pedro is also a musician. He also had a daughter, Martha Maria, from his last marriage with Martha Velasco.