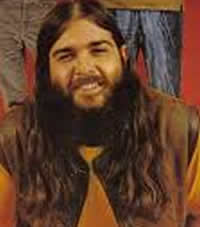 Bob Hite died aged thirty-eight on 5th April 1981 from a drugs overdose. During a break between sets at The Palomino Club in North Hollywood, California, U.S.A., he was handed a drug vial by a fan. Thinking it contained cocaine, Bob Hite stuck a straw into the vial and snorted it. The drug turned out to be heroin and Bob turned blue and collapsed. After this he was driven to a nearby residence where he soon died.

Bob Hite as a young man was introduced to guitarist Al Wilson by Henry Vestine.
In 1965, aged twenty-two, Bob Hite formed a bandwith Al Wilson.
Henry Vestine joined soon after and this trio formed the core of CannedHeat.

Bob Hite performed with Canned Heat at Woodstock in August 1969.

The performances were included in the 1994 "Director's Cut" version of the movie Woodstock.