Buddy Holly died aged twenty-two on 3rd February 1959, when his plane crashed, shortly after take-off, into a cornfield five miles northwest of the Mason City, Iowa, U.S.A. . His body, along with those of other entertainers were all ejected from the plane on impact. 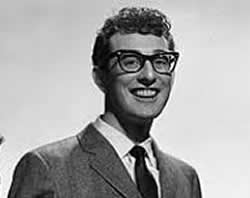 Buddy Holly's funeral was held on 7th February 1959, at the Tabernacle Baptist Church in Lubbock, Texas, U.S.A.. The service was officiated by Ben D. Johnson, who had presided at Buddy Holly's wedding just months earlier. The pallbearers were Jerry Allison, Joe B. Mauldin, Niki Sullivan, Bob Montgomery, Sonny Curtis, and Phil Everly. Buddy Holly's body was interred in the City of Lubbock Cemetery, in the eastern part of the city. His headstone carries the correct spelling of his surname (Holley) and a carving of his Fender Stratocaster guitar.
Buddy's Winter Dance Party tour began in Milwaukee, Wisconsin, on 23rd January 1959. The amount of travel involved created logistical problems, as the distance between venues had not been properly considered when scheduling performances. Adding to the problem, the unheated tour buses twice broke down in freezing weather, with dire consequences. Buddy's drummer Carl Bunch was hospitalized for frostbite to his toes, suffered while aboard the bus, so Buddy decided to seek other transportation. Before their appearance in Clear Lake, Iowa, on 2nd February Buddy Holly chartered a four-seat Beechcraft Bonanza airplane from Dwyer Flying Service in Mason City, Iowa, for Jennings, Allsup, and himself. Buddy's idea was to depart following the show at the Surf Ballroom in Clear Lake and fly to their next venue, in Moorhead, Minnesota, via Fargo, North Dakota, allowing them time to rest and launder their clothes and avoid a rigorous bus journey. Immediately after the Clear Lake show, which ended just before midnight, Allsup lost a coin toss and gave up his seat on the plane to Ritchie Valens, while Waylon Jennings voluntarily gave up his seat to J. P. Richardson (the Big Bopper), who had influenza and complained that the tour bus was too cold and uncomfortable for a man of his size.
In the dressing room after the Clear Lake show, Allsup agreed to flip a coin for the seat with Valens. Allsup took out a brand new half-dollar, and Ritchie called heads. Heads it was. "That's the first time I've ever won anything in my life," Valens reportedly said. Allsup later opened a restaurant in Fort Worth, Texas called Heads Up.
The pilot, Roger Peterson, took off in inclement weather, although he was not certified to fly by instruments only.

ected out of the state, the payments were frozen until the dispute was settled. Petty then could not complete the transfers to Buddy, who considered him responsible for the missing profit.
Buddy Holly returned to Clovis for a new recording session, which yielded "Reminiscing" and "Come Back Baby". During the session, he ventured into producing by recording Lubbock DJ, Waylon Jennings. Buddy Holly produced the single "Jole Blon" and "When Sin Stops (Love Begins)" for Jennings. Buddy Holly became increasingly interested in the New York music, recording, and publishing scene. Maria and he settled in Apartment 4H of the Brevoort Apartments, at 11 Fifth Avenue in Greenwich Village, where he recorded a series of acoustic songs, including "Crying, Waiting, Hoping" and "What to Do". In October, Buddy Holly recorded tracks for Coral; these were backed by saxophonist Boomie Richman and an 18-piece orchestra composed of former members of the NBC Symphony Orchestra. The three-and-a-half-hour session produced "It Doesn't Matter Anymore", "Raining in My Heart", "Moondreams" (written by Petty). Buddy Holly ended his association with Petty in December 1958. His band members kept Petty as their manager then Buddy Holly also split from the Crickets. Petty was still holding the money from the royalties, forcing Buddy Holly to form a new band and return to touring.
Buddy Holly vacationed with his wife in Lubbock and visited Jennings's radio station in December 1958. For the start of the fateful Winter Dance Party tour, he assembled a band consisting of Waylon Jennings (electric bass), Tommy Allsup (guitar), and Carl Bunch (drums).