Robert Heaton died aged forty-three on 4th November 2004 from pancreatic cancer. He was survived by his wife, Robin and his son, Marlon.
Robert Heaton was born in Knutsford, Cheshire, United Kingdom but lived in Canada and Belgium as a child. Robert was musically gifted, eventually mastering the guitar and harmonica as well as the drums, for which he is better-known, and also played keyboards and fiddle. Robert Heaton began playing guitar and 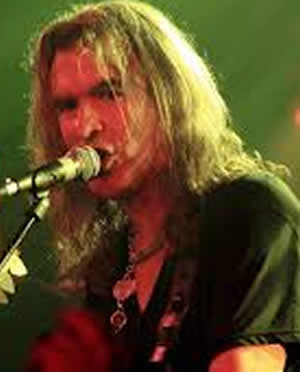 drumming along to his dad's collection of traditional jazz recordings. He developed a very eclectic musical taste, taking in obvious rock influences including Led Zeppelin and ZZ Top but also but also the country music of Johnny Cash and classical composers such as Beethoven, Mozart, Tchaikovsky and Vivaldi.
Robert Heaton's arrival marked the start of New Model Army's professional period, the band has previously had Phil Tompkins on drums, but had released no recordings during this time. Having spent several years as back line roadie and tour manager for several other bands, including Hawkwind, Robert brought professional experience to the band's touring life and was responsible for the hiring of their long-term tour manager 'Tommy T' Walker. Together with frontman Justin Sullivan, Robert Heaton was the core of the Bradford-based New Model Army, originally alongside Stuart Morrow on bass and then later with Jason 'Moose' Harris. Robert Heaton's wide-ranging musical interests are manifested in the music for the anthemic "Green and Grey" as well as co-writing with Sullivan the New Model Army singles "Better Than Them", "Brave New World", "51st State", "Poison Street", "White Coats", "Space" and "Here Comes the War". He was responsible for many of New Model Army's best-known compositions, which are still played nowadays at their gigs.
Robert left New Model Army in 1998 due to health reasons. He had long suffered from sarcoidosis, undergoing repeated surgery, and was then diagnosed with a brain tumour - and was replaced on drums by his roadie Michael Dean. Though the surgery on his brain tumour was successful, he was advised by his surgeons that he would be unlikely to play musical instruments professionally for several years, which ultimately resulted in the end of his career with New Model Army.
Following his illness Robert Heaton began a successful landscape gardening business and eased himself back into music, initially as a New Deal adviser, then producer and recorder of local bands in Bradford under the 'Fresh Milk' project, eventually launching a touring and recording band called the Gardeners of Eden not long before he died.