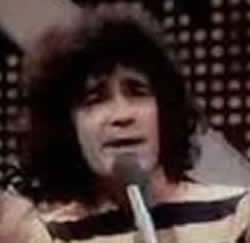 Alex Harvey died on 4th February 1982, a day short of his 47th birthday, when he suffered a massive heart attack while waiting to take a ferry from Zeebrugge, Belgium, to England after performing a Belgian gig with his new band, the Electric Cowboys. He suffered a second, fatal attack in an ambulance on the way to hospital. He left behind his second wife, Trudy, and two sons (Alex, by his first wife, Mary Martin, and Tyro). In 2002, a biography of Alex Harvey by John Neil Munro was published: The Sensational Alex Harvey. The Sensational Alex Harvey Band were voted the fifth greatest Scottish band of all time in a 2005 survey. After Alex Harvey's death, they released two live albums, Live in Glasgow 1993 and Zalvation , which feature many classic SAHB songs. On 4th February 2012, a rowan tree was planted in memory of Alex Harvey on the grounds of the People's Palace museum in Glasgow. The tree was planted by Alex Harvey Junior and the remaining members of the band.

Alex Harvey was born on 5th February 1935 in the Kinning Park district of Glasgow, Scotland, a working-class neighbourhood, where he grew up. By his own account, he worked in a number of jobs, from carpentry to being a waiter at a restaurant to carving tombstones, before finding success in music. He first began performing in skiffle groups in 1954. On Friday, 20th May 1960, at the Town Hall in Alloa, Alex Harvey and his Big Beat Band opened for Johnny Gentle and His Group.
His musical roots were in Dixieland jazz and skiffle music, which enjoyed considerable popularity in Britain during the late 1950's. From 1958 until 1965, he was the leader of Alex Harvey's Big Soul Band, playing blues and rock and roll songs and spending considerable time touring in the United Kingdom and Germany. He also won a competition that sought "Scotland's answer to Tommy Steele". Alex Harvey became strongly identified with British rhythm and blues music, although he was

equally able to perform rock songs.
After leaving the Big Soul Band, he briefly tried for a solo career but with little success. By 1967, he found a positive direction for his career, when he became a member of the pit band in the London stage production of the musical Hair. This band recorded the live album Hair Rave Up, which contained Alex Harvey originals and other songs not from the stage show. In 1970, Alex Harvey formed Rock Workshop with Ray Russell; their first, self-titled album contained an early version of "Hole in Her Stocking", later to appear on Framed. Alex Harvey remained with Hair for five years.
Alex Harvey was also instrumental in the formation of the band Stone the Crows by introducing his younger brother, Leslie "Les" Harvey, to singer Maggie Bell. Also in Stone the Crows was bassist James Dewar, later of Robin Trower fame. Les Harvey was electrocuted in a freak accident while performing with the band in 1972.
Also in 1972, Alex Harvey formed the Sensational Alex Harvey Band (often shortened to SAHB) with guitarist Zal Cleminson, bassist Chris Glen, and cousins Hugh and Ted McKenna on keyboards and drums respectively, all previous members of progressive rock act Tear Gas. SAHB produced a succession of highly regarded albums and tours throughout the 1970's. The band never achieved acclaim in the United States the way it did in Great Britain, but it had a cult following in certain US cities, especially Cleveland, where the group first played at the Agora Ballroom in December 1974. Thanks to airplay from WMMS, songs like "Next" and "The Faith Healer" became very popular. Cleveland remained a city where the Sensational Alex Alex Harvey Band had a devoted following. However, they were unable to replicate that popularity in most other American cities.
The Sensational Alex Alex Harvey Band had Top 40 hits in Britain with the single "Delilah", a cover version of the Tom Jones hit, which reached number seven in 1975, and also with "The Boston Tea Party" in June 1976.