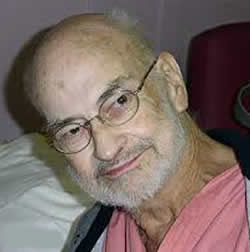 Dick Heckstall-Smith died aged seventy on 17th December 2004 from acute liver failure. He was survived by his ex-wife Gaby and by their son.
Dick Heckstall-Smith was born in the Royal Free Hospital, in Ludlow, England, and was raised in Knighton, Radnorshire, learning to play piano, clarinet and alto saxophone in childhood. He attended a York boarding school but refused a second term there, instead enrolling in Gordonstoun, where his father had accepted a job as headmaster of the local grammar school.
Dick Heckstall-Smith completed his education at Dartington Hall School, before reading agriculture – and co-leading the university jazz band – at Sidney Sussex College, Cambridge, from 1953. Aged fifteen, he had taken up the soprano sax while at Dartington, captivated by the sound of Sidney Bechet. Then Lester Young and tenor saxophonist bebop jazzman Wardell Gray proved to be major influences for him.
Dick Heckstall-Smith was an active member of the London jazz scene from the late 1950s (including a six-month stint from December 1957 with the band led by clarinettist Sandy Brown). He joined Blues Incorporated, Alexis Korner's groundbreaking blues group, in 1962, recording the album R&B from the Marquee. The following year, he was a founding member of that band's breakaway unit, The Graham Bond Organisation, a lineup which also included two future members of the blues-rock supergroup Cream: bassist Jack Bruce and drummer Ginger Baker.
In 1967, Dick Heckstall-Smith became a member of guitarist-vocalist John Mayall's blues rock band, Bluesbreakers. That jazz-skewed edition of the band also

included drummer Jon Hiseman, bassist Tony Reeves, and future Rolling Stones guitarist Mick Taylor. They released the album 'Bare Wires' in 1968.
From 1968 to 1971, Dick Heckstall-Smith, Hiseman, and Reeves were members of the pioneering UK jazz-rock band Colosseum. The band afforded Dick Heckstall-Smith an opportunity to showcase his writing and instrumental virtuosity, playing two saxophones simultaneously.
After leaving Colosseum, Dick Heckstall-Smith recorded solo albums and fronted and played in several other fusion units, including Manchild, Sweet Pain, Big Chief, Tough Tenors, The Famous Bluesblasters, Mainsqueeze, and DHSS. Collaborating musicians common to many of these outfits included Victor Brox, Keith Tillman and harp player John O'Leary.
Dick Heckstall-Smith participated in a 1990s reunion of the original Colosseum lineup and played in the hard-working Hamburg Blues Band. In 2001 he recorded the all-star project Blues and Beyond, which reunited him with Mayall, Bruce, Taylor, ex-Mayall and Fleetwood Mac guitarist Peter Green. In the 1980s, in his Electric Dream ensemble, Dick Heckstall-Smith also worked with the South African percussionist Julian Bahula.
Dick Heckstall-Smith published his witty memoirs, The Safest Place in the World, in 1984; an expanded version, retitled Blowing the Blues, was published in 2004.
<<go to top>>