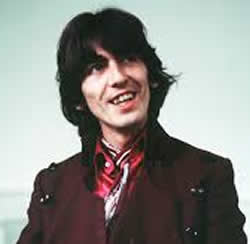 e stopped me in the middle of a sax solo and brought me 3 p.m. tea—again I thought he was kidding." 'Cloud Nine' reached number eight and number ten on the US and UK charts respectively, and several tracks from the album achieved placement on Billboard's Mainstream Rock chart .
In 1988 George Harrison formed the Travelling Wilburys with Jeff Lynne, Roy Orbison, Bob Dylan and Tom Petty. The band had gathered in Dylan's garage to record a song for a George Harrison European single release. George 's record company decided the track, "Handle with Care", was too good for its original purpose as a B-side and asked for a full album. The LP, Traveling Wilburys Vol. 1, was released in October 1988 and recorded under pseudonyms as half-brothers, supposed sons of Charles Truscott Wilbury, Sr. George Harrison's pseudonym on the first album was "Nelson Wilbury"; he used the name "Spike Wilbury" for their second album.
After Roy Orbison's death in December 1988 the group recorded as a four-piece. Their second release, issued in October 1990, was mischievously titled Travelling Wilburys Vol. 3. According to Lynne, "That was George's idea. He said, 'Let's confuse the buggers.'" It reached number fourteen in the UK, where it went platinum with certified sales of more than 3,000,000 units. The Willburys never performed live and the group did not record together again following the release of their second album.
In 1989 George Harrison and Ringo Starr appeared in the music video for Tom Petty's song "I Won't Back Down". Ringo Starr is filmed playing the drums, but did not play on the track; Harrison played acoustic guitar and provided backing vocals. In December 1991, George Harrison joined Eric Clapton for a tour of Japan. It was George's first since 1974 and no others followed. On 6th April 1992, George Harrison held a benefit concert for the Natural Law Party at the Royal Albert Hall, his first London performance since the Beatles' 1969 rooftop concert. In October 1992 he performed at a Bob Dylan tribute concert at Madison Square Garden in New York City, playing alongside Dylan, Clapton, McGuinn, Petty and Neil Young.

song: 'That's What It Takes' by George Harrison