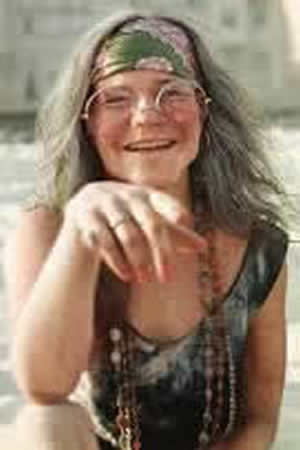 Hollywood, California, U.S.A. . Producer Paul Rothchild had became concerned when Janis failed to show up at Sunset Sound Recorders for a recording session. Her road manager then drove to the where Janis was staying. He saw Janis Joplin's psychedelically painted Porsche 356 C Cabriolet in the parking lot. Upon entering Janis's room he found her dead on the floor beside her bed. The official cause of death was a heroin overdose, possibly compounded by alcohol.

ng the way that she felt men treated women in relationships. Also included was the social commentary of "Mercedes Benz", presented in an a cappella arrangement; the track on the album features the first and only take that Janis Joplin recorded. A cover of Nick Gravenites's "Buried Alive in the Blues," to which Janis Joplin had been scheduled to add her vocals on the day she was found dead, was included as an instrumental. In 2003, 'Pearl' was ranked No. 122 on Rolling Stone magazine's list of the 500 Greatest Albums of All Time.
Janis Joplin checked into the Landmark Motor Hotel in Hollywood on August 24th 1970, near Sunset Sound Recorders, where she began rehearsing and recording her album. During the sessions, Janis continued a relationship with Seth Morgan, a 21-year-old UC Berkeley student, cocaine dealer, and future novelist who had visited her new home in Larkspur in July and August. She and Morgan were engaged to be married in early September.
Peggy Caserta claimed in her book, 'Going Down With Janis' that she and Janis had decided mutually in April 1970 to stay away from each other to avoid enabling each other's drug use.
On September 26th 1970, Janis Joplin recorded vocals for "Half Moon" and "Cry Baby". Then Full Tilt Boogie recorded the instrumental track for "Buried Alive in the Blues". The session ended with Janis Joplin, organist Ken Pearson, and drummer Clark Pierson making a special one-minute recording as a birthday gift to John Lennon. Janis Joplin was among several singers who had been contacted by Yoko Ono with a request for a taped greeting for Lennon's 30th birthday, on October 9. Janis Joplin, Pearson, and Pierson chose the Dale Evans composition "Happy Trails" as part of the greeting. Lennon told Dick Cavett on-camera the following year that Janis Joplin's recorded birthday wishes arrived at his home after her death.

Janis Joplin's death stunned her fans and shocked the music world, especially when coupled with the death just 16 days earlier of another rock icon, Jimi Hendrix, also at age 27.

song: 'Get It While You Can' by Janis Joplin.