Jet Harris, died aged seventy-one from cancer on 18th March 2011 at the home 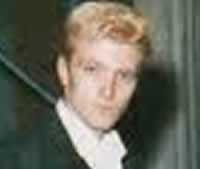 of his partner Janet Hemingway in Winchester, Hampshire, U.K. It was two years after Jet, who had been a heavy smoker, had been diagnosed with cancer. Jet was survived by five sons and one daughter.
In 2012 the UK Heritage Foundation erected a blue plaque in his memory at the Kingswood Centre, Honeypot Lane, Kingsbury, London NW9 on the site of the former Willesden Maternity Hospital where he was born. At the luncheon that followed the unveiling of the plaque, various musicians took part in a performance in Jet's memory. Tributes were read by Bruce Welch and Marty Wilde and one sent by Hank Marvin.

Jet Harris was the only child of Bill and Winifred Harris and was born Terence Harris at Willesden Maternity Hospital, Honeypot Lane, Kingsbury, North West London, U.K. His prowess as a sprinter at Dudden Hill secondary modern school earned him the nickname Jet.
Although he learned to play clarinet as a teenager, Jet made his own four-string double bass to play in a jazz group and later graduated to a professionally made double bass. In 1958, while playing jazz with drummer Tony Crombie and his group the Rockets, Crombie aquired a Framus bass guitar for Jet, making him one of the first British exponents of the instrument.
Jet played in several groups including the Vipers Skiffle Group and the Most Brothers before, in 1959, joining Cliff Richard's backing group, the Drifters, who later changed their name to The Shadows at Jet's suggestion. In 1959, after the neck of his Framus was terminally damaged in a dressing room accident, he was presented by the importers with a Fender Precision Bass, one of the first to come to Britain from the United States.
Other sources state that Cliff Richard gave Jet the first Fender Bass (sunburst) guitar in the UK in 1960, about a year after band-mate Hank Marvin got his first red Fender Stratocaster guitar. Both instruments were eventually replaced with matching versions which were used in the film The Young Ones, in which The Shadows played "The Savage" to an invited audience of teenagers.
Jet Harris also contributed vocally, adding backup harmonies and occasional lead vocals. He had a trademark scream, used in the Shadows' "Feeling Fine" and Cliff Richard's "Do You Wanna Dance?"
In 1962, Jet Harris left The Shadows following disagreements, mostly with Bruce Welch over his drinking habit .
Jet signed with Decca and released solo instrumental and vocal work with some success, "Besame Mucho" and "The Man with the Golden Arm" featuring a Fender VI six-string bass guitar. Then, as part of a duo with former Shadows drummer Tony Meehan, he topped the UK Singles Chart for three weeks in early 1963 with "Diamonds". Jet Harris and Meehan followed this with two further hit singles, "Scarlett O'Hara" a UK No. 2, and "Applejack" reaching UK No. 4 also in 1963. Tracks from "Diamonds" onward were recorded with Jet using standard Fender Jaguar and Gretsch guitars, usually de-tuned to D instead of E. Jet was partly responsible for helping Jimmy Page and John Paul Jones break into the music business. Page's first major session was as a rhythm guitarist on "Diamonds" in late 1962. After "Diamonds" became a hit, Jet Harris and Meehan hired Jones to play bass in their touring band.
There were several court appearances involving drunkenness and violent behaviour before the partnership with Meehan came to an abrupt end in September 1963 when a car crash on what was then the A44 near Evesham, Worcestershire, in which his girlfriend, singer Billie Davis, was also injured, meant that this success did not last long. Jet Harris attempted a comeback as the Jet Harris Band, in 1966 and was briefly in the line-up of The Jeff Beck Group in 1967, but somewhat fell out of the music industry. He then worked variously as a labourer, bricklayer, porter in a hospital, bus conductor, and as a seller of cockles on the beach in Jersey.Jet Harris and Meehan also made two short cameo appearances in the black and white film Just for Fun, released in 1963. In the film, Jet and the Jetblacks played "Man From Nowhere.
Jet Harris was declared bankrupt in 1988. The BBC reported that it took Jet Harris 30 years of heavy drinking before he finally admitted to being an alcoholic and sought help. For many years, Jet made a point in his stage shows of saying how long it had been since he quit drinking, winning applause from audiences who knew how it had wrecked his career in the '60s. Jet Harris still played occasionally, with backing band the Diamonds or as a guest with the Rapiers, and guested with Tony Meehan at Cliff Richard's 1989 'The Event' concerts.
In 1998, Jet was awarded a Fender Lifetime Achievement Award for his role in popularising the bass guitar in Britain. He appeared annually at Bruce Welch's 'Shadowmania' and toured backed by the Rapiers (a Shadows tribute band). He recorded continuously from the late 1980s with a variety of collaborators, including Tangent, Alan Jones (also an ex-Shadows bassist), Bobby Graham and the Local Heroes. His previous problems with stage nerves had seemingly disappeared, and 2006 saw Jet Harris' first single release in over forty years, "San Antonio".
From 2005 to 2009, Jet Harris achieved a lifetime ambition by touring UK theatres with his own show, "Me and My Shadows". The Rapiers performed as his 'Shadows', and he had a special guest star in his former girlfriend Billie Davis, who had rescued him when the pair were in a road crash in late 1963 that effectively ended his

career. "I'm going to go out in my twilight years with a big bang—and 'Me and My Shadows' is one of my little dreams,"
In 2007, Jet Harris was invited by UK singer Marty Wilde to be a special guest on his 50th Anniversary tour. This culminated in an evening at the London Palladium, with other guests including Wilde's daughters Kim and Roxanne, Justin Hayward of The Moody Blues, and original Wildcats members Big Jim Sullivan, Licorice Locking and Brian Bennett, who joined Hank Marvin and Bruce Welch of The Shadows on stage with Wilde and the current Wildcats (Neville Marten and Eddie Allen on guitar, Roger Newell bass, and Bryan Fitzpatrick, drums). The show's finale featured the closest thing to a Shadows reunion possible, with Marvin, Welch, Jet Harris, Locking and Brian Bennett all appearing on stage with the show's company.
The evening was filmed, and a DVD released, with Jet Harris playing three tunes – "Diamonds", "Theme From Something Really Important" and "Scarlett O'Hara" – backed by the Wildcats. So successful was this tour that Wilde repeated the invitation to join him on his 2010 Born to Rock and Roll tour, which finished in Basingstoke on 20th November. Jet Harris said that this was his most enjoyable working experience in years.
In 2010, Jet Harris started working with the Shadowers, led by guitarist Justin Daish. He began plans for a new show, featuring fresh material he had never performed before. However, regular tour dates and studio recordings with the Shadowers, Brian "Licorice" Locking and Alan Jones, though discussed, never materialised due to Jet Harris' poor health. His last concert on 5th February 2011 at Ferneham Hall in Fareham, U.K. saw him perform one tune ,"Here I Stand" from his album "The Phoenix Rises" .
Jet Harris was appointed Member of the Order of the British Empire (MBE) in the 2010 New Year Honours.
In 2010, Jet was presented with a special award from the US Fender guitar company for his services to their company in effectively launching their bass guitar in the UK in 1960.
<<go to top>>