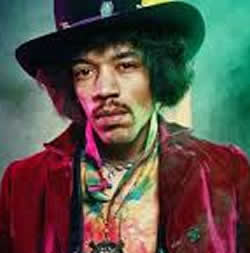 en on 18th September 1970 from asphyxia. He had been found unconscious and unresponsive after which paramedics took him to St Mary Abbot's Hospital in London, U.K. and he was pronounced dead there. Jimi had spent much of the day before in London with Monika Dannemann who said that she had prepared a meal for them at her apartment in the Samarkand Hotel, 22 Lansdowne Crescent, Notting Hill, at around 11 p.m., and they shared a bottle of wine. She then drove Jimi to the residence of an acquaintance at approximately 1:45 a.m., where he stayed for about one hour before she picked him up and drove them back to her flat at 3 a.m. Monika disclosed that they conversed until around 7 a.m then went to sleep. Monika awoke at aproximately eleven a.m., and found Jimi still breathing at that time but alarmed, she called for an ambulance.
To determine the cause of death, coroner Gavin Thurston ordered a post-mortem examination on Jimi's body, which was performed on September 21st by Professor Robert Donald Teare, a forensic pathologist. Thurston completed the inquest on September 28th and concluded that Jimi Hendrix aspirated his own vomit and died of asphyxia while intoxicated with barbiturates. Citing "insufficient evidence of the circumstances", he declared an open verdict. Monika later revealed that Jimi Hendrix had taken nine of her prescribed Vesparax sleeping tablets.
After Jimi Hendrix's body had been embalmed by Desmond Henley, it was flown to Seattle, Washington, on September 29th 1970. After a service at Dunlop Baptist Church on October 1st it was interred at Greenwood Cemetery in Renton, Washington, the location of his mother's gravesite. Jimi Hendrix's family and friends travelled in twenty-four limousines and more than two hundred people attended the funeral, including several notable musicians such as original Experience members Mitch Mitchell and Noel Redding, as well as Miles Davis, John Hammond, and Johnny Winter.

rted $300,000 annually. Architect and acoustician John Storyk designed Electric Lady Studios for Jimi Hendrix, who requested that they avoid right angles where possible. With round windows, an ambient lighting machine, and a psychedelic mural, Storyk wanted the studio to have a relaxing environment that would encourage Jimi Hendrix's creativity. The project took twice as long as planned and cost twice as much as Jimi Hendrix and Jeffery had budgeted, with their total investment estimated at $1 million.
Jimi Hendrix first used Electric Lady on June 15th 1970, when he jammed with Steve Winwood and Chris Wood of Traffic; the next day, he recorded his first track there, "Night Bird Flying". The studio officially opened for business on August 25th and a grand opening party was held the following day. Immediately afterwards, Jimi Hendrix left for England; he never returned to the U.S.A. He boarded an Air India flight for London with Cox, joining Mitchell for a performance as the headlining act of the Isle of Wight Festival.
When the European leg of the 'Cry of Love' tour began, Jimi Hendrix was longing for his new studio and creative outlet, and was not eager to fulfill the commitment. On September 2nd 1970, he abandoned a performance in Aarhus after three songs, stating: "I've been dead a long time". Four days later, he gave his final concert appearance, at the Isle of Fehmarn Festival in Germany. He was met with booing and jeering from fans in response to his cancellation of a show slated for the end of the previous night's bill due to torrential rain and risk of electrocution. Immediately following the festival, Hendrix, Mitchell, and Cox travelled to London.
Three days after the performance, Cox, who was suffering from severe paranoia after either taking LSD or being given it unknowingly, quit the tour and went to stay with his parents in Pennsylvania. Within days of Jimi Hendrix's arrival in England, he had spoken with Chas Chandler, Alan Douglas, and others about leaving his manager, Michael Jeffery. On September 16th Jimi Hendrix performed in public for the last time during an informal jam at Ronnie Scott's Jazz Club in Soho with Eric Burdon and his latest band, War. They began by playing a few of their recent hits, and after a brief intermission Jimi Hendrix joined them during "Mother Earth" and "Tobacco Road". His performance was uncharacteristically subdued; he quietly played backing guitar, and refrained from the histrionics that people had come to expect from him. He died less than 48 hours later.