Michael Holliday died aged thirty-eight on 29th October 1963 in Croydon, Surrey, UK from a probable drugs overdose . His grave can be found at Anfield Cemetery, Priory Road, Liverpool, UK. Michael had battled for years with stage fright and had a mental breakdown in 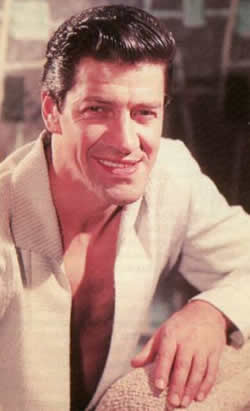 Michael was born in Liverpool, U.K. and brought up in the Kirkdale district of the city. His career in music began after winning an amateur talent contest, 'New Voices of Merseyside', at the Locarno Ballroom, West Derby Road, Newsham, Liverpool. According to Elvis Costello, while working as a seaman in the Merchant Navy, Michael would smuggle obscure U.S. jazz records into the UK, where Elvis' mother sold them. Finding himself in the U.S. as a seaman, Michael Holliday was persuaded to enter a talent contest at Radio City Music Hall in New York City and again he won, inspiring him to seek a career in show business. In 1951 he secured two summer seasons of work as a vocalist with Dick Denny's band at Butlin's Holiday Camp, Pwllheli, Wales.

In March nineteen-fifty-three Michael Holliday joined the Eric Winstone Band, another Butlin's contracted band that toured when the summer season's work was over. They also broadcast occasionally on BBC Radio. In December nineteen-fifty-four, Michael wrote to the BBC requesting a television audition. His audition came in April nineteen-fifty-five and he made his first TV appearance on The Centre Show on 22nd July nineteen-fifty-five. This TV performance was seen by Norrie Paramor, then head of A&R for EMI's Columbia record label, who signed him as a solo artist. He also sang "Four Feather Falls", the theme tune to the puppet-based television programme of the same name produced by Gerry Anderson.

Michael Holliday's style of singing was heavily influenced by Bing Crosby, who was his idol. The style would earn him the title of "the British Bing Crosby". A biography entitled The Man Who Would Be Bing, written by Ken Crossland, was published in 2004.