Bill Rieflin died aged fifty-nine from cancer on 24th March, 2020 after his wife, 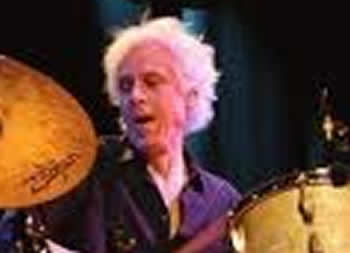 Francesca, had died in 2019.
Bill was birth-named William Frederick Rieflin and was born on 29th September, 1960 in Seattle, Washington, United States of America. He began his professional career in his hometown of Seattle and in 1975, he was in 'The Telepaths', a band which played backup for a couple of live gigs by the pre-The Screamers band The Tupperwares. He played drums for The Blackouts starting in 1979. His bandmates included Mike Davidson, Paul Barker, Roland Barker and Erich Werner. His earliest collaboration with Al Jourgensen was on the second single by the Revolting Cocks, 'You Often Forget'. Later, he participated in the creation of Ministry's album 'The Land of Rape and Honey', and was noted for his performance in the live video 'In Case You Didn't Feel Like Showing Up'. His work with Ministry and its side projects lasted through to the mid-nineties, though he noted that he was never credited as a member of Ministry proper, always as an "other" musician. Therefore, when he parted ways with the band during the Filth Pig sessions, he did not really quit since he was never an official member.
Bill Rieflin helped kick off Pigface, the industrial collective that would grow to incorporate hundreds of artists, formed a friendship with labelmate Chris Connelly and founded First World Music. Like Chris Connelly, Bill Rieflin's work grew beyond his industrial roots. They have collaborated on several recordings; two in particular, The Ultimate Seaside Companion (as "The Bells") and Largo, showcase of Bill Rieflin's keyboard skills.
Bill Rieflin's solo debut, Birth of a Giant, featured him singing in something other than a background role, and also featured Robert Fripp. Improvisations from these sessions turned up later on the CD 'The Repercussions of Angelic Behavior', which was credited to Bill Rieflin, Fripp and Trey Gunn.
Bill Rieflin appeared on all KMFDM records released from 1995 to 2003 as a drummer, programmer, vocalist and keyboardist. He toured with the band as a bassist in 2002 in support of its comeback album, Attak, and performed on the 2011 KMFDM album, WTF?!. He also drummed for Scott McCaughey's band, The Minus 5, which occasionally included guitarist Peter Buck. Eventually Peter Buck offered Bill Rieflin the opportunity to sit in with R.E.M., who were missing a permanent drummer since the 1997 departure of Bill Berry. The band gave him the live drummer slot in its 2003 tour. They later announced that Bill Rieflin would fill the role indefinitely, though once again as a hired musician rather than as an official member. In recordings, Bill Rieflin also contributed bouzouki, keyboards and guitars to the group, serving as an auxiliary member until R.E.M. disbanded in 2011.
Bill Rieflin formed an experimental ensemble under the name 'Slow Music' in 2005 (including Fripp and Buck) in which he played synthesizers rather than drums. The group played a small handful of live dates in 2005 and 2006 and became inactive for several years. He was also involved in a music collaboration project entitled The Humans, which consisted of him, Chris Wong, Robert Fripp and Toyah Willcox. The band performed a series of live dates in Estonia in Autumn 2007 and 2009, and released their debut album We are the Humans in 2009. Hector Zazou's 2010 album Corps Electriques featured Bill Rieflin, as well as KatieJane Garside, Lone Kent and nu-jazz trumpeter Nils Petter Molvær.
Bill Rieflin was a regular contributor to Swans ever since the 1995 album The Great Annihilator, and played an array of instruments on all their studio recordings since the band reformed in 2010 and released 'My Father Will Guide Me up a Rope to the Sky'. Bill Rieflin is listed as an "honorary Swan" on the band's 2012 album The Seer.

music: 'Birth of a Giant' Full Album by Bill Rieflin