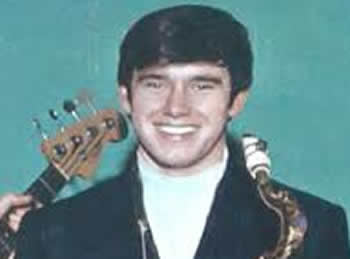 Bournemouth, Hampshire, United Kingdom. Dennis was survived by his wife, two sons and two stepsons.
In October 2006, two months prior to Dennis' death, the Dave Clark Five was nominated for induction into the Rock and Roll Hall of Fame. Surviving members of the band were present and Denis Dennis Payton was honoured with the band posthumously.
Dennis Payton was born in Walthamstow, East London, United Kingdom. As a child he learned to play guitar, saxophone and other wind instruments. As a teenager he played in a jazz band while studying to become an electrician. Through his band membership, he made acquaintance with members of other bands. Being a competent musician, he was often invited to join them, and he moved from one band to another. One of his acquaintances was Dave Clark, the leader of the group ‘Dave Clark Five with Stan Saxon. When Saxon, who played saxophone and occasionally sang, departed in 1962 along with second saxophonist Jim Spencer, the group was renamed as the ‘Dave Clark Five’, and Denis Payton became his successor.
In its early years, Dave Clark’s group primarily played instrumental music. While Stan Saxon sometimes sang, after his departure pianist Mike Smith, who later exchanged his piano for an electronic organ, provided the vocals. The group changed its repertoire from jazz and dance music to pop music.
After Dennis Payton’s arrival, the band’s line-up comprised Dave Clark (drums), Mike Smith (vocals and organ), Lenny Davidson (guitar), Rick Huxley (bass guitar) and Denis Payton (saxophone). This line-up remained unchanged for the next eight years. Apart from saxophone, Dennis Payton occasionally played guitar and harmonica (he played the harmonica solo on the group’s hit single "Catch Us If You Can" and played the sousaphone on "The Red Balloon"), and sang background vocals. Dennis Payton also co-wrote over two dozen songs with Dave Clark for the group, two of which he sang lead vocals: "I Miss You" and "Man in the Pin Striped Suit."
The Dave Clark Five scored many big hits, both in the United Kingdom and the United States. Apart from "Catch Us If You Can", other million sellers were "Glad All Over", "Bits and Pieces" and "Over and Over." Dennis Payton enjoyed his finest hour when the great American jazz saxophonist Stan Getz, one of Dennis Payton's music idols, asked Dennis Payton for his autograph after attending a Dave Clark Five concert.
In 1970, the group disbanded. Dennis Payton became an estate agent in Bournemouth, but he continued to play in a few amateur bands in his spare