Honey Lantree died aged seventy-five from Breast Cancer at her home in Great Bardfield, Essex, United Kingdom on 23th December 2018. She was 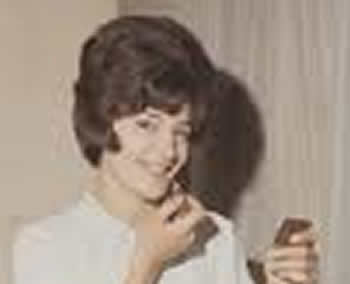 survived by her sons Matthew and Simon and her five grandchildren.
Honey was born Anne Margot Lantree on 28th August 1943. After attending school in Highams Park, Essex, United Kingdom, she began to focus on a career as a hairdresser, training in a salon in Hackney, East London. The owner of the salon also led an amateur group called the Sheratons and its members would sometimes leave their instruments at his house. One day, in 1963, Anne picked up the drumsticks and found that she had a natural talent.
The owner of the salon also showed Anne’s brother, John, how to play the bass, and so the line-up of the Sheratons evolved. They were given a residency at the Mildmay Tavern in Islington, North London, and became so popular that the landlord offered them work five nights a week, shutting the doors at 9pm because the place was already full.
From there they secured an audition with the maverick record producer Joe Meek, who had his own studio in the nearby Holloway Road. When Joe Meek saw the band had a female drummer, he speedily recognised a valuable selling point.
At that stage the group were performing varioud pop covers and some rhythm and blues favourites. But new material soon came from Ken Howard and Alan Blaikley, floor managers at the BBC who had begun to write songs in their spare time. They heard the Sheratons and offered them some new material, including "Have I the Right".
Joe Meek immediately cottoned on to the song’s potential: the Dave Clark Five had just had a UK number 1 UK hit with "Bits and Pieces", and he thought a similar stamping beat could be employed for the chorus of "Have I the Right". Honey thumped the drums heavily and Joe Meek overdubbed some boot stomping from the rest of the group on the studio’s wooden stairs. The single was licensed to Pye Records but their managing director Louis Benjamin wanted a name change for the band, suggesting to the members: “You can be the Honeycombs and Anne can be Honey.” Under their new name "Have I The Right" was proclaimed record of the week on the pirate radio station Caroline and within three weeks they were at Number 1, replacing Manfred Mann’s "Do Wah Diddy" Diddy on Honey’s 21st birthday. The single sold more than a million copies in the UK and also became an international hit, making the top 10 in the US and number 1 in Australia, South Africa and Japan.  The following year Anne and Denis D'Ell sang together on another Howard-Blaikley composition, "That’s the Way", and it spent fourteen weeks in the UK charts.
In 1967 Joe Meek, plagued with mental health problems, took his own life and thereafter Howard and Blaikley switched to work mainly for Dave Dee, Dozy, Beaky, Mick and Tich, and a slightly rearranged Honeycombs line-up decided to move into cabaret but their fortunes did not improve and they broke-up later that year.

Honey went on to marry David Coxall, a pensions administrator, in 1969, and spent most of the next two decades raising their two sons, Matthew and Simon. A reconstituted version of the Honeycombs returned in the 1980s with Honey playing drums and continued as a live act until singer Denis D'Ell’s death in 2005.

song:' That's The Way' by The Honeycombs