John Mayhew died aged sixty-two on 26th March 2009 of a heart condition in Glasgow, Scotland on the eve of his 62nd birthday and had been working as a carpenter for a furniture company at the time of his death. He was survived by his brother Paul. 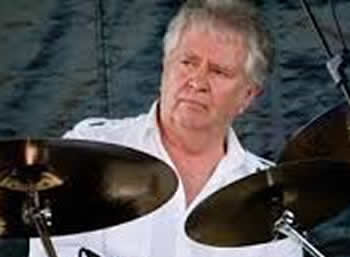 John Mayhew grew up in Ipswich with his brother who was ten years older. His parents parted and John, who by then was in his teens, went with his father. After that he saw very little of Paul, who had remained with their mother.
John inherited his love of music from his mother, and played with bands in the Ipswich area, such as 'The Clique' and 'The Epics'. He moved to the London scene in the late 1960's, where he joined another band, 'Milton's Finger', and recorded a few songs.
In early 2009 Paul Mayhew had begun a search for John, having not seen John for eighteen years and having had little to do with him since the early 1970s.
John Mayhew joined Genesis in the summer of 1969 to replace departing drummer John Silver. Despite legend saying John Mayhew was recruited via an advert in Melody Maker, John Mayhew said in a 2006 interview that he was contacted by Mike Rutherford after the bassist had found his phone number. The band was impressed by John Mayhew’s long-haired appearance and professionalism, plus the fact he brought his own drums with him. As well as being a professional musician, John Mayhew was also a carpenter. He installed proper panelling and seating in the band’s transport, a former bread delivery van, as well as building the cabinet for a home-made Leslie speaker that would often grind to a halt during live performances. John stayed with Genesis until his dismissal in July 1970 after which he was replaced by Phil Collins.
Little was known of John Mayhew's whereabouts following his departure from Genesis. There was speculation that he was deceased or missing. In 1982, he moved to Australia, where he found work as a carpenter. In 1989, he briefly returned to England to visit his ailing mother. In 2006, he attended a Genesis convention in London, along with Anthony Phillips and Steve Hackett, and played drums for tribute band called ReGenesis.