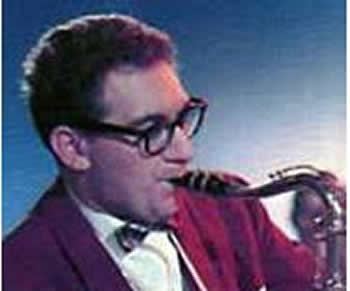 in Philadelphia, Pennsylvania, United States of America.  Soon after a 1974 tour of Europe, Rudy Pompilli had been diagnosed with lung cancer. He was not a smoker himself, and he is believed to have developed the disease through passive smoking. Rudy continued to tour with Bill Haley throughout 1975 and that year also recorded his first and only solo album, 'Rudy's Rock: The Sax That Changed the World'. He also continued to perform at the Nite Cap, a club in Chester, Pennsylvania; at one of his very last performances he performed with his former Comets bandmate Franny Beecher as well as then-current Comets guitarist Bill Turner.
Rudy Pompilli was born in Chester, Pennsylvania. He was skilled at playing both saxophone and clarinet, and spent the beginning of his career playing in jazz bands. In 1953 he was with the Ralph Marterie Orchestra.
Rudy Pompilli was invited to join the Comets in September 1955, after Bill Haley's previous sax player, Joey Ambrose, quit along with two other Comets to form The Jodimars. Joey Ambrose gave Rudy Pompilli a crash course in the Haley style of saxophone playing, and he also learned the stage antics pioneered by Joey and bass player Marshall Lytle, including playing the sax while lying flat on his back and jumping all over the bass player. At Bill Haley's request, Rudy changed the spelling of his last name from "Pompilii" to "Pompilli", as Haley was concerned that the former looked like a typographical error. Rudy Pompilli also frequently used the alias "Rudy Pell" and many of his autographs from the 1950s show this name used rather than Rudy Pompilli.
Within a few months of joining The Comets, Rudy had become the band's most visible member, aside from Bill Haley himself, becoming the focus of "Rudy's Rock", a show-stopping instrumental co-written by Rudy Pompilli and Bill Haley that debuted in the 1956 movie 'Rock Around the Clock'. When released as a single, "Rudy's Rock" reached number 34 on the Billboard singles chart and number 38 on the Cashbox Top Singles list, spending 4 weeks on that chart, and making it the first instrumental record of the rock and roll era to chart. Other acclaimed, but less commercially successful instrumentals followed, most notably "Calling All Comets" which was performed in the band's next film, nineteen fifty-seven's 'Don't Knock the Rock'.  In 1958, Rudy's cousin, Al Pompilli, joined the Comets for a year, playing bass after the departure of Al Rex.
Rudy Pompilli co-wrote the hit "Week End" with Franny Beecher and Billy Williamson, which reached number thirty-five on the Billboard pop chart when released as a single in 1958 as by The Kingsmen. He also co-wrote the B-side, "Better Believe It", with Johnny Grande and Ralph Jones. Rudy composed the hit "Florida Twist" with Anthony Caruso, which reached number three on the Mexican pop singles chart in 1962 based on the Billboard Hits of the World chart. "Florida Twist" has since become a party standard in Latin America and has been covered by many artists in rock and roll, Tex-Mex and other genres.
Bill Haley's band would undergo many changes of personnel over the next two decades, but the one constant was Rudy Pompilli, who would become the band's road manager, taking

care of paying the bills and arranging for the hiring of new musicians when required. Rudy, however, did briefly quit the Comets during 1960-61 and was replaced by Al Dean, but he soon returned to them. Rudy Pompilli also did solo work, performing regularly in Philadelphia area night clubs, either by himself or with members of the Comets.

song:'Rudy's Rock' by Bill Haley and the Comets