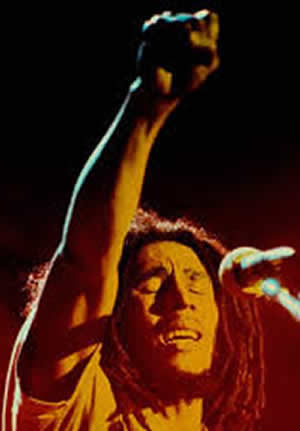 dars of Lebanon Hospital in Miami, Florida, U.S.A. due to the spread of melanoma to his lungs and brain. Bob's final words to his son Ziggy were "Money can't buy life."
Bob Marley received a state funeral in Jamaica on 21st May 1981, which combined elements of Ethiopian Orthodoxy and Rastafari tradition. He was buried in a chapel near his birthplace.
In July 1977, Bob Marley was found to have a type of malignant melanoma under the nail of a toe. Contrary to urban legend, this lesion was not primarily caused by an injury during a football match that year, but was instead a symptom of the already-existing cancer. Bob Marley turned down his doctors' advice to have his toe amputated (which would have hindered his performing career), citing his religious beliefs, and instead the nail and nail bed were removed and a skin graft taken from his thigh to cover the area. Despite his illness, he continued touring and was in the process of scheduling a world tour in 1980.
The album 'Uprising' was released in May 1980. The band completed a major tour of Europe, where it played its biggest concert to 100,000 people in Milan. After the tour Bob Marley went to America, where he performed two shows at Madison Square Garden in New York City as part of the Uprising Tour.
Bob Marley's last concert occurred at the Stanley Theater (now called The Benedum Center For The Performing Arts) in Pittsburgh, Pennsylvania, U.S.A. on 23rd September 1980.
Shortly afterwards, Bob Marley's health deteriorated as the cancer had spread throughout his body. The rest of the tour was cancelled and Bob Marley sought treatment at the Bavarian clinic of Josef Issels, where he received a controversial type of cancer therapy (Issels treatment) partly based on avoidance of certain foods, drinks, and other substances. After fighting the cancer without success for eight months Bob Marley boarded a plane for his home in Jamaica.
While Bob Marley was flying home from Germany to Jamaica, his vital functions worsened. After landing in Miami, Florida, he was taken to the hospital for immediate medical attention.

or in hiding.
Bob Marley left Jamaica at the end of nineteen-seventy-six, and after a month-long "recovery and writing" sojourn at the site of Chris Blackwell's Compass Point Studios in Nassau, Bahamas, arrived in England, where he spent two years in self-imposed exile.
Whilst in England, he recorded the albums Exodus and Kaya. Exodus stayed on the British album charts for fifty-six consecutive weeks. It included four UK hit singles: "Exodus", "Waiting in Vain", "Jamming", and "One Love". During his time in London, he was arrested and received a conviction for possession of a small quantity of cannabis. In 1978, Bob Marley returned to Jamaica and performed at another political concert, the One Love Peace Concert, again in an effort to calm warring parties. Near the end of the performance, by Bob's request, Michael Manley (leader of then-ruling People's National Party) and his political rival Edward Seaga (leader of the opposing Jamaica Labour Party), joined each other on stage and shook hands.
Under the name Bob Marley and the Wailers eleven albums were released, four live albums and seven studio albums. The releases included Babylon by Bus, a double live album with thirteen tracks, were released in 1978 and received critical acclaim. This album, and specifically the final track "Jamming" with the audience in a frenzy, captured the intensity of Bob Marley's live performances.
'Survival', a defiant and politically charged album, was released in 1979. Tracks such as "Zimbabwe", "Africa Unite", "Wake Up and Live", and "Survival" reflected Bob Marley's support for the struggles of Africans. His appearance at the Amandla Festival in Boston in July 1979 showed his strong opposition to South African apartheid, which he already had shown in his song "War" in nineteen-seventy-six. In early 1980, he was invited to perform at 17th April celebration of Zimbabwe's Independence Day.

song: 'Waiting In Vain' by Bob Marley & the Wailers