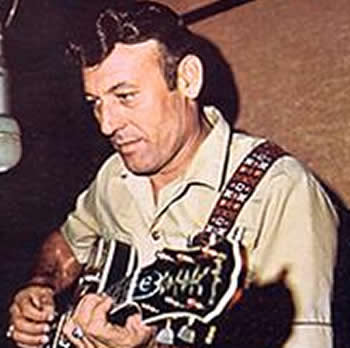 Roll Hall of Fame in 1987. "Blue Suede Shoes" was chosen as one of the Rock and Roll Hall of Fame's “500 Songs That Shaped Rock and Roll”. The song also received a Grammy Hall of Fame Award. Carl Perkins was inducted into the Rockabilly Hall of Fame in recognition of his pioneering contribution to the genre.
Carl Perkins's only notable film performance as an actor was in John Landis's 1985 film Into the Night, a cameo-laden film that includes a scene in which characters played by Carl Perkins and David Bowie die at each other's hand.
Carl Perkins returned to the Sun Studio in Memphis in 1986, joining Cash, Jerry Lee Lewis and Roy Orbison on the album Class of '55. The record was a tribute to their early years at Sun and, specifically, the Million Dollar Quartet jam session involving Carl Perkins, Presley, Cash, and Lewis in 1956.
In 1989, Carl Perkins co-wrote and played guitar on the Judds' number one country hit, "Let Me Tell You About Love". Also in that year, he signed a record deal with Platinum Records for the album Friends, Family, and Legends, featuring performances by Chet Atkins, Travis Tritt, Steve Wariner, Joan Jett and Charlie Daniels, along with Paul Shaffer and Will Lee. On the album was Carl's recording of his own "Wild Texas Wind", which was the title song for the 1991 Dolly Parton made-for-television movie Wild Texas Wind. During the production of this album, Carl Perkins developed throat cancer.
Carl again returned to Sun Studio to record with Scotty Moore, Presley's first guitar player, for the album ReUNION, released by Belle Meade Records, which also featured D.J. Fontana, Marcus Van Storey and the Jorddanaires. In 1993, Carl Perkins performed with the Kentucky Headhunters in a music video remake of his song "Dixie Fried", filmed in Glasgow, Kentucky, In 1994, he teamed up with Duane Eddy and the Mavericks to contribute "Matchbox" to the AIDS benefit album Red Hot + Country, produced by the Red Hot Organization.
His last album, Go Cat Go!, released by the independent label Dinosaur Records in 1996, features Carl Perkins singing duets with Bono, Johnny Cash, John Fogerty, George Harrison, Paul McCartney, Willie Nelson, Tom Petty, Paul Simon, and Ringo Starr. His last major concert performance was the Music for Montserrat all-star charity concert at London's Royal Albert Hall on 15th September 1997.