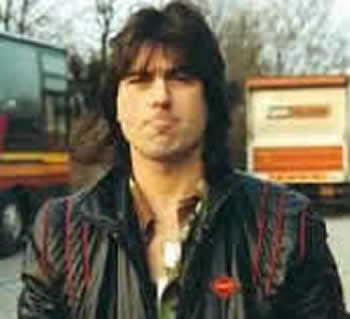 driving his Saab 9000 car in bad weather on the M4 motorway near Bristol, Avon, U.K. He was ejected through the windscreen and died at the scene. According to the BBC report, at the time of the crash his blood-alcohol reading was over the legal limit, and he was not wearing a seat belt.
Cozy was living at Lambourn, Berkshire at the time and had returned to the studio shortly before his death to record with Fleetwood Mac co-founder Peter Green. At the time of his death Cozy had recently had to pull out of tour rehearsals with Yngwie Malmsteen, having suffered an injury in a motorcycle accident. One of his last phone calls, to his fanclub editor, Joe Geesin, was to express distress about this and to describe the physio treatment he was undergoing, and to voice his enthusiasm for the then forthcoming Brian May tour.
A memorial plaque in Cirencester, Gloucestershire, U.K. was unveiled on 7th January 2016, in a ceremony led by Brian May along with Suzi Quatro, Bernie Marsden, Neil Murray, Don Airey and Tony Iommi.
Cozy Powell was born Colin Flooks in Cirencester, Gloucestershire, U.K. and was adopted and met his birth parents. He started playing drums aged twelve in the school orchestra, thereafter playing along in his spare time to popular singles of the day. The first band he was in, called the Corals, played each week at the youth club in Cirencester. During this time the band broke the world record for non-stop playing. At the age of fifteen, Cozy had already worked out an impressive drum solo. The stage name "Cozy" was borrowed from the jazz drummer Cozy Cole.
The semi-professional circuit was next, with semi-pro outfit The Sorcerers, a vocal harmony pop band. The late nights and usual on-the-road exploits began to affect his education, and Cozy left to take an office job to finance the purchase of his first set of Premier drums. His band, the Sorcerers performed on the German club scene of the 1960s.
By 1968 the band had returned to England, basing themselves around Birmingham. Powell struck up friendships with fellow musicians including Robert Plant and John Bonham, future Slade vocalist Noddy Holder, bassist Dave Pegg and a young Tony Iommi. The Sorcerers now became Youngblood, and a series of singles were released in late 1968–69. The group then linked up with The Move's bassist/singer Ace Kefford to form The Ace Kefford Stand. Five recorded tracks are available on the Ace Kefford album 'Ace The Face' released by Sanctuary Records in 2003. Cozy Powell also began session work and with fellow Sorcerers Dave and Denny Ball formed Big Bertha.
Cozy Powell also played with swamp rocker Tony Joe White at the Isle of Wight Festival 1970. He then landed the then highly prestigious drumming job with Jeff Beck's group in April 1970. Their first project was to record an album of Motown covers in the USA. After the recording of two albums, Rough and Ready in October 1971 and Jeff Beck Group in July 1972, the band fell apart.
With Cozy Powell's session work at RAK and subsequent solo success, including "Dance with the Devil", which reached number 3 in the UK singles chart during January 1974, Bedlam disbanded. "Dance With The Devil" was Cozy's only solo hit in the United States, peaking at number 49. The track featured Suzi Quatro on bass. Cozy's's second hit during 1974 was with "The Man in Black", which reached a respectable number 18. Arrows front man Alan Merrill, also a RAK records artist, played electric bass on '"The Man in Black'" and the b-side '"After Dark." Jeff Beck's studio producer was Mickie Most and Cozy Powell soon found himself drafted into sessions for artists signed to Most's RAK label, including Julie Felix, Hot Chocolate, Donovan and Suzi Quatro. To cash in on his chart success the drummer formed Cozy Powell's Hammer in April 1974. The line-up included Bernie Marsden (guitar), Clive Chaman (bass), Don Airey (keyboards) and Frank Aiello (Bedlam) on vocals. Clive Chaman was replaced on bass by Neil Murray in the band in early 1975 for the RAK Rocks Britain Tour. "Na Na Na" was a UK number 10 hit, and another single "Le Souk" was recorded but never released. Sharing a love of the power-trio set up, Cozy Powell formed a band with guitarist Clem Clempson and bassist Greg Ridley (Humble Pie), but when this fell apart Cozy temporarily quit the music business to take up motorcycle racing.
In 1975 he joined Rainbow. Cozy Powell and Ritchie Blackmore were the only constants in the band's line-up over the next five years, as Blackmore evolved the sound of the band from a neo-classical hard rock-heavy metal to a more commercial AOR sound. Rainbow's 1979 Down to Earth LP, from which singles "Since You Been Gone" and "All Night Long" are taken, proved to be the band's most successful album thus far. However, Cozy was concerned over the overtly commercial sound and decided to leave Rainbow, although not before they headlined the first ever Monsters of Rock show at Castle Donington, England, on 16th August 1980. The festival was Cozy Powell's last show with the Rainbow.

After he left Rainbow he worked with vocalist Graham Bonnet, he too an ex-Rainbow member, on Bonnet's new project called Graham Bonnet & The Hooligans, their most notable single being the UK top 10 single "Night Games" in 1981. For the rest of the 1980s, Cozy Powell assumed short-term journeyman roles with a number of major bands – Michael Schenker Group from 1981 to 1982, and Whitesnake from 1982 to 1985. In 1985 he started recording with Phenomena for their self-titled first album, which was released the same year, when he joined up with Keith Emerson and Greg Lake as a member of Emerson, Lake & Powell. He also worked briefly with another new supergroup named Forcefield along with Bonnet and later Tony Martin on vocals, former Ian Gillan Band member Ray Fenwick and former Focus member Jan Akkerman on the guitars, Neil Murray and later Laurence Cottle on bass.
Cozy Powell worked with Gary Moore in 1988, followed by stints with Black Sabbath from 1988 to 1991, and again in 1994–1995. Between late 1992 and early 1993, he put together an occasional touring band using the old band name 'Cozy Powell's Hammer' featuring himself on drums, Neil Murray on bass, Mario Parga on guitar and Tony Martin on vocals and occasional rhythm guitar/synth module. The band performed throughout Europe and appeared on German television. Cozy made headlines in 1991 when he appeared on the BBC children's programme Record Breakers, where he set a world record for the most drums played in under one minute, live on television.
Cozy Powell, along with Neil Murray, were members of Brian May's band, playing on the Back to the Light and Another World albums. He played with May opening for Guns N' Roses on the second American leg of their Use Your Illusion tour in 1993. The duo also served a spell with blues guitarist Peter Green in the mid-nineties. Cozy Powell briefly joined Yngwie Malmsteen for the album Facing the Animal in 1997. His last recording session was for Colin Blunstone's The Light Inside, alongside Don Airey. The final solo album by Cozy Powell Especially for You was released in 1998 after his death, and featured American vocalist John West, Neil Murray, Lonnie Park, Michael Casswell and others.

Do you like this website? If so, then please copy and email the link: http://www.rockapaedia.com to your friends, colleagues and aquaintances.
Thankyou.