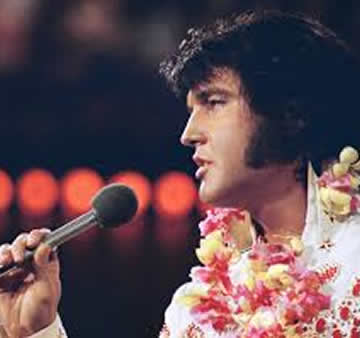 neteen-seventy-seven in Memphis, Tennessee, U.S.A. Elvis was scheduled to fly out of Memphis on that evening to begin another tour and that afternoon, Ginger Alden discovered him unresponsive on his bathroom floor. According to her eyewitness account, Elvis looked as if his entire body had completely frozen in a seated position while using the commode and then had fallen forward, in that fixed position, directly in front of it. It was clear that, from the time whatever hit him to the moment he had landed on the floor, he hadn't moved. Attempts to revive him failed, and death was officially pronounced at 3:30 p.m. at Baptist Memorial Hospital.
President Jimmy Carter issued a statement that credited Elvis Presley with having "permanently changed the face of American popular culture". Thousands of people gathered outside Graceland to view the open casket. One of Elvis Presley's cousins, Billy Mann, accepted eighteen thousand dollars to secretly photograph the corpse; the picture appeared on the cover of the National Enquirer's biggest-selling issue ever. Ginger Alden struck a one-hundred-and-fifty-thousand dollar deal with the Enquirer for her story, but settled for less when she broke her exclusivity agreement. Elvis Presley left her nothing in his will.
Elvis Presley's funeral was held at Graceland on Thursday, 18th August 1977. Outside the gates, a car plowed into a group of fans, killing two women and critically injuring a third. Approximately eighty thousand people lined the processional route to Forest Hill Cemetery, where Elvis Presley was buried next to his mother. Within a few days, "Way Down" topped the country and UK pop charts.
Following an attempt to steal Elvis Presley's body in late August, the remains of both Elvis Presley and his mother were reburied in Graceland's Meditation Garden on October 2nd nineteen-seventy-seven.
Drug use was heavily implicated in Elvis Presley's death and no-one ruled out the possibility of anaphylactic shock brought on by the codeine pills , to which he was known to have had a mild allergy. A pair of lab reports filed two months later each strongly suggested that polypharmacy was the primary cause of death.
More recent research has revealed that it was only Dr Francisco who told the news people that Elvis apparently died of heart failure. In fact, the doctors "could say nothing with confidence until they got the results back from the laboratories, if then. That would be a matter of weeks. Dr Dan Warlick, who was present at the autopsy, believed that Elvis Presley's chronic constipation, the result of years of prescription drug abuse and high-fat, high-cholesterol gorging, brought on what's known as Valsalva's maneuver. Put simply, the strain of attempting to defecate compressed Elvis Presley's abdominal aorta, shutting down his heart.

ck" on the soul classic "Hurt".
Elvis Presley and Linda Thompson split in November nineteen-seventy-six, and he took up with a new girlfriend, Ginger Alden. He proposed to Alden and gave her an engagement ring two months later, though several of hi s friends later claimed that he had no serious intention of marrying again. Elvis Presley's mind dulled by the pharmacopia he daily ingested, he was barely able to pull himself through his abbreviated concerts. In Alexandria, Louisiana, Elvis Presley was on stage for less than an hour and was impossible to understand. Elvis Presley failed to appear in Baton Rouge since he was unable to get out of his hotel bed, and the rest of the tour was cancelled. Despite the accelerating deterioration of his health, he stuck to most touring commitments. In Rapid City, South Dakota, he was so nervous on stage that he could hardly talk . A cousin, Billy Smith, recalled how Elvis Presley would sit in his room and chat for hours, sometimes recounting favorite Monty Python sketches and his own past escapades, but more often gripped by paranoid obsessions that reminded Smith of Howard Hughes. "Way Down", Elvis Presley's last single issued during his lifetime, came out on June 6th nineteen-seventy-six. On the next tour, CBS filmed two concerts for a TV Special, Elvis in Concert, to be aired in October nineteen-seventy-six . Two days later in Rapid City, He looked healthier, seemed to have lost a little weight, and sounded better, too. Elvis Presley's final concert was held in Indianapolis, Indiana at Market Square Arena, on June 26th, nineteen-seventy-six

song: 'If I can Dream by Elvis Presley