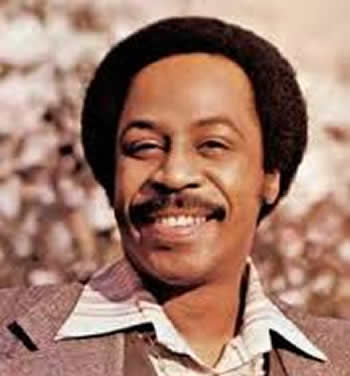 Harold Melvin died aged fifty-seven on 24th March 1997 of a stroke in Philadelphia, Pennsylvania, U.S.A.. He was survived by his wife Ovelia and five children and he was one of the pioneers of the Philly Sound which now epitomises mid-Seventies popular music.

Harold Melvin was born in Philadelphia in 1941. The young Harold sang doo-wop on street corners with his childhoood friends. They took up the name Harold Melvin & the Blue Notes and released the "If You Love Me" single on the local Josie label in 1956. The group played the local club scene, recording intermittently for small labels. They also cut a few tracks for Chess (with Luther Dixon) and the TK label (with Henry Stone). The Blue Notes constantly changed line-up but were very much Harold's group, though he didn't always appear on stage with them. Rather, he choreographed their routines as well as arranging and composing some of their material, though they mostly sung standards and show tunes when performing in supper clubs.

By 1970, Harold Melvin was the only original member left, and Teddy Pendergrass, who had joined from the Cadillacs, had stepped out from behind the drumkit to take up lead vocals in a line-up which also comprised Lloyd Parkes, Lawrence Brown and Bernard Wilson. His characteristic vocal stylings attracted the attention of Kenny Gamble and Leon Huff, two veteran songwriters and producers who had just set up the Philadelphia International operaton and signed a distribution deal with Columbia. In 1972, Harold Melvin & the Blue Notes joined a roster which would soon include the O'Jays, Billy Paul and the Three Degrees and take over from Tamla Motown as the sound of mid-Seventies America.

After finding minor success with "I Miss You", they recorded "If You Don't Know Me By Now", a Gamble and Huff composition full of passion and yearning. It reached the American and British Top ten in late 1972 and sold over two million copies. The song became a classic and was a popular choice for filmmakers trying to give a flavour of the period. It was revived by Simply Red in 1989.
The Philly Sound ruled discotheques the world over and, in 1973, Harold Melvin & the Blue Notes hit big-time again with "The Love I Lost". Rich orchestrations and catchy choruses also ensured that "Satisfaction Guaranteed", "Where Are All My Friends" and "Bad Luck" were

dance-floor fillers, while at the same time making pointed comments on the state of America. "Wake Up, Everybody", another political plea for peace and harmony penned by Gene McFadden, John Whitehead and Victor Castarphen and produced by Gamble and Huff, saw them back in the pop charts in 1976.

Before leaving the Blue Notes, Teddy Pendergrass had recorded "Don't Leave Me This Way" which battled it out with Thelma Houston's version in early 1977.

Having replaced Pendergrass with David Ebo, the Blue Notes left Philadelphia International for ABC. "Reaching for the World" was a R&B hit but the group's popularity was on the wane, they returned to the night-club and cabaret circuit which was their original home.

song:'If You Don't Know Me By Now' by Harold Melvin & BlueNotes