Henry McCullough died aged seventy-two on 14th June 2016, at his home at Ballywindelland, Ballymoney, Northern Ireland after either a stroke or a heart attack. He was survived by his wife Josie and son Jesse. 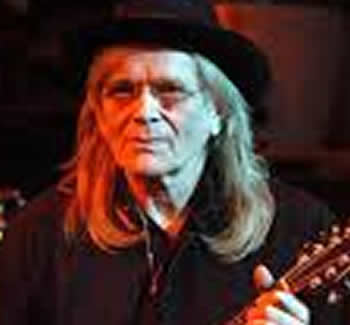 Henry was born Henry Campbell Liken McCullough in Portstewart, Northern Ireland on 21st July 1943 and first came to prominence in the early 1960s as the teenage lead guitarist with the Skyrockets showband from Enniskillen. In 1964, with three other members of the Skyrockets, he left and formed a new showband fronted by South African born vocalist Gene Chetty, which they named Gene and the Gents.
In 1967 Henry McCullough moved to Belfast where he joined bass guitar player Chris Stewart, vocalist Ernie Graham and drummer Dave Lutton to form the psychedelic band called the People. Later that year the band moved to London and were signed by Chas Chandler's management team, who changed the group’s name to Éire Apparent. Under Chandler's guidance and after a 45rpm single release they toured with groups including Pink Floyd, Soft Machine, the Move the Jimi Hendrix Experience and Eric Burdon's Animals.
Things went according to plan until in Vancouver, Canada during February 1968, while Éire Apparent was touring with the Animals, Henry McCullough returned to the United Kingdom, officially because of "visa problems" and Mick Cox flew out to take his place in the band. Back in Ireland in around May 1968 Henry joined folk group Sweeney's Men.
Henry McCullough returned to London around 1969 to work with Joe Cocker as a member of his backing band, the Grease Band. With Joe Cocker he toured America and performed at the Woodstock Festival and he later played on the Grease Band's eponymous album. During his time with this band he appeared as lead guitarist on the studio album of Andrew Lloyd Webber and Tim Rice's rock opera Jesus Christ Superstar in 1970 and on the Spooky Tooth album 'The Last Puff' also in 1970.
In 1971 Paul McCartney invited Henry McCullough to join his new band, Wings, alongside Denny Laine and Denny Seiwell. Musical differences with Paul McCartney, however, saw Henry McCullough leave on the eve of the 'Band on the Run' sessions. He had spent two years in Wings, playing lead guitar on "Hi, Hi, Hi", "Live and Let Die" as well as "My Love".
Henry McCullough's spoken words "I don't know; I was really drunk at the time" can be heard on the Pink Floyd album The Dark Side of the Moon from 1973, at the end of the song "Money". He was recalling a fight he had the night before with his wife.
In 1975 Henry McCullough joined the Frankie Miller Band with bassist Chris Stewart, keyboard player Mick Weaver and drummer Stu Perry. They recorded the album, 'The Rock with Miller'. Later the same year Henry McCullough released his 'Mind Your Own Business' album on George Harrison's Dark Horse record label.
Henry McCullough played concerts as a session musician with Roy Harper, Frankie Miller, Eric Burdon, Marianne Faithfull, Ronnie Lane and Donovan. In 1977 he temporarily joined Dr. Feelgood, following the departure of Wilko Johnson.
Recovering from an injury to his hand while visiting his family in 1980, Henry McCullough decided to stay in Ireland. He began to sit in with old friends the Fleadh Cowboys, at their Sunday afternoon residency in The Lower Deck in Dublin. Following this he moved back to Portstewart and put a new band together. He was joined by Percy Robinson on pedal steel guitar, Roe Butcher on bass and Liam Bradley on drums.
In 1998 Henry McCullough travelled to Poland, where he rehearsed with a band of Polish musicians for a tour. After the tour, they recorded a 'live' album which was released as Blue Sunset. This was followed by a further Polish tour. On returning home, Henry McCullough recorded and released "Failed Christian", a song that has since been covered by Nick Lowe on his album Dig My Mood.

Henry McCullough continued to record and perform and released solo material, including 'Belfast To Boston' in 2001 and 'Unfinished Business' in 2003. The latter contained his 1998 single, "Failed Christian". Henry McCullough performed at concerts in Northern Ireland and Scotland, playing with a backing band featuring Stephen Quinn on drums and Sean McCarron on saxophone.
Henry McCullough contributed guitar on, and organised the band for, the Alaskan musician, The Rev Neil Down's 2003 release, When A Wrong Turns Right.
In 2007, the band Over the Rhine covered Henry's song "Failed Christian" on their album, Live from Nowhere, Vol. II. In the same year, Henry started to work with Dave Sharp from the Alarm and together they enlisted keyboard player Zoot Money, bassist Gary Fletcher and drummer Colin Allen, a line up which became known as the Hard Travellers. In January 2008 the Hard Travellers performed their debut gig at The Cellars in Portsmouth.
In 2008 Henry McCullough recorded Poor Man's Moon at Amberville Studios, which was released in Ireland only on 5th September 2008. and featured new Henry McCullough compositions. The album also included a number of songs co-written with poet Eamon Carr from Horslips and included the single "Too Late to Worry". Among the musicians featured on the album were keyboard player James Delaney, bassists Roe Butcher and Nicky Scott, keyboard player Enda Walsh, drummer Adie McIlduff and Percy Robinson on dobro and pedal steel guitar.
At the end of 2007 Henry worked on the album "Dark Nite of the Soul" with Jeff Greene as well as other musical collaborations recorded at various studios. Henry McCullough attended Paul McCartney's concert at the O2 in Dublin on 20th December 2009 and Paul publicly acknowledged Henry McCullough's contribution to Wings. On 13th March 2010, Henry McCullough and his band were the headline act at the Fifestock Festival at the Inn at Lathones, Scotland.
Henry McCullough remained active in the European music scene and played regular live gigs with artists including Ed Deane, James Delaney, Noel Bridgeman, also John Quearney. In 2011 Henry collaborated with songwriter Paul Doherty and the Vals on the track 'Look to the One'. The song gained worldwide airplay, with Henry McCullough contributing backing vocals and guitar.
Henry McCullough suffered a heart attack in November 2012, leaving him in critical condition. His death was mistakenly reported on a Radio 1 show on 7th November and the BBC also apologised after prematurely reporting his death.
On 17th March 2015 a benefit concert for Henry McCullough was held at The Half Moon, Putney music venue in London, U.K. featuring Paul Carrack, Nick Lowe, Andy Fairweather Low, Suggs and Bobby Tench .

song: 'My Love' by Wings with Henry McCullough