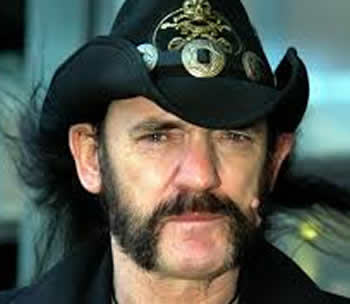 ia, U.S.A. just four days after his 70th birthday.
Lemmy's memorial service took place at Forest Lawn Memorial Park, Hollywood Hills, on 9th January 2016. The service was streamed live over YouTube with more than 230,000 people logging on to watch, while others gathered at the Rainbow. His body was cremated following the funeral. His remains were placed in a 3D-printed mantle-piece shaped like his trademark cavalry hat and emblazoned with the slogan "born to lose, lived to win" and was on display during his funeral. Lemmy was later interred at Forest Lawn.
Lemmy was born on 24th December 1945 in Stoke-on-Trent, Staffordshire, UK. When he was three months old, his father, an ex-Royal Air Force chaplain and concert pianist, separated from his mother. His mother and grandmother moved to nearby Newcastle-under-Lyme, then to Madeley. When Lemmy was ten, his mother married former footballer George Willis.
The family moved to a farm in the Welsh town of Benllech, Anglesey, with Lemmy later commenting that "funnily enough, being the only English kid among 700 Welsh ones didn't make for the happiest time, but it was interesting from an anthropological point of view". He attended Sir Thomas Jones' School in Amlwch, where he was nicknamed "Lemmy". He soon started to show an interest in rock and roll music, girls, and horses.
In school, Lemmy noticed a pupil who had brought a guitar to school. His mother had a guitar, which he then took to school, even though he could not play, but was surrounded by girls. By the time he left school, his family had moved to Conwy. There, he worked at menial jobs including one in the local Hotpoint electric appliance factory, while also playing guitar for local bands such as the Sundowners and spending time at a horse-riding school. Lemmy saw the Beatles perform at the Cavern Club when he was sixteen and then learned to play along on guitar to their first album. He also admired the sarcastic attitude of the group, particularly that of John Lennon.
In Stockport, Lemmy joined local bands the Rainmakers and then the Motown Sect who played northern clubs for three years. In 1965 he joined the Rockin' Vickers who signed a deal with CBS, released three singles and toured Europe, reportedly being the first British band to visit the Socialist Federal Republic of Yugoslavia. The Rockin' Vickers moved to Manchester, where they lived together in a flat. There Lemmy got involved with a girl named Tracy who bore him a son, Paul Inder. Lemmy did not have any involvement with him until the boy was six.
Leaving the Rockin' Vickers, Lemmy moved to London in 1967. He shared a flat with Noel Redding, bassist of the Jimi Hendrix Experience. He got a job as a roadie for the band. In 1968 he joined the psychedelic rock band Sam Gopal under the name Ian Willis and recorded the album Escalator which was released in 1969. After meeting Simon King in a Chelsea shopping centre in 1969, he joined the band Opal Butterfly; but the group soon folded.
In 1971 Lemmy joined the space rock band Hawkwind as a bassist and vocalist. He had no previous experience as a bass guitarist, and was cajoled into joining immediately before a benefit gig in Notting Hill by bandmate Dik Mik to have two members who enjoyed amphetamines. He quickly developed a distinctive style that was strongly shaped by his early experience as a rhythm guitarist, often using double stops and chords rather than the single note lines preferred by most bassists. His bass work was a fundamental part of the Hawkwind sound during his tenure, perhaps best documented on 'Space Ritual'. He also provided the lead vocals on several songs, including the band's biggest UK chart single, "Silver Machine", which reached Number 3 in 1972.
In 1975 Lemmy was arrested at the Canada/US border in Windsor, Ontario, on drug possession charges; he spent five days in jail but was released without charge. Nonetheless he was fired from Hawkwind.
After Hawkwind, Lemmy formed a new band called "Bastard". When his manager informed him that a band by the name of "Bastard" would never get a slot on Top of the Pops, Lemmy changed the 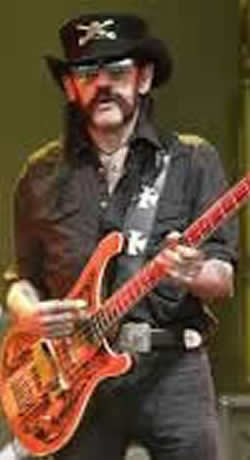 band's name to "Motörhead" – the title of the last song he had written for Hawkwind.
Lemmy's guttural vocals were unique in rock at that time, and were copied during the time when punk rock became popular. The band's sound appealed to Lemmy's original fans and, eventually, to fans of punk. Lemmy asserted that he generally felt more kinship with punks than with metalheads; he even played with the Damned for a handful of gigs when they had no regular bassist. The band's success peaked in 1980 and 1981 with several UK chart hits, including the single "Ace of Spades", which remained a crowd favourite throughout the band's career, and the UK No. 1 live album 'No Sleep 'til Hammersmith'. Motörhead became one of the most influential bands in heavy metal.

music: 'No Class' by Motorhead