Leon Russell died aged seventy-four in his sleep at his 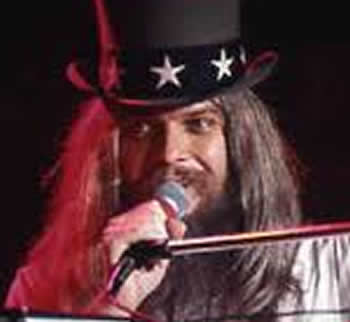 suburban Nashville home in Mt. Juliet, Tennessee, U.S.A. on 13th November 2016. Leon Russell's funeral was on 18th November at Victory Baptist Church, in Mt. Juliet, Tennessee,U.S.A. and a public memorial was held at The Oral Roberts University Mabee Center on 20th November.
Elton John, who had once been Russell's opening act, acknowledged him as his biggest influence as a piano player, a singer and a songwriter. Pixies' vocalist Black Francis credits Leon Russell with influencing his vocal style and said Leon Russell sang in a southern accent but it was very blown-out and exaggerated, very free and loose.
Leon Russell fathered six children. His oldest daughter Blue was with Carla McHenry. She was born February 20th 1972 and was named Blueagle after Oklahoman and Native American Artist Acee Blue Eagle. Leon Russell married Mary McCreary on June 20th 1975. Mary was a musical partner. They had two children, daughter Tina Rose and son Teddy Jack. Leon Russell and Mary divorced in October 1980. He married Janet Lee Constantine on February 6th 1983. They had three daughters together, Sugaree Noel, Honey and Coco.

th Vocals at the 2010 Grammy Awards, which were presented on February 13th, 2011.
In 2011, the documentary film The Union by Cameron Crowe was released. It explored the creative process of Elton John and Leon Russell in the making of the 2010 album The Union. Leon Russell played in Willie Nelson's Fourth of July Picnic in Fort Worth, Texas in 2013. He had first played at the picnic in 1976.
In 2014, the album Life Journey was released on Universal Records. Working with Tommy LiPuma, this album included two new songs by Leon Russell: "Big Lips" and "Down in Dixieland".
On March 16th, 2015, a restored version of a previously unreleased 1974 documentary about Leon Russell, A Poem Is A Naked Person by filmmaker Les Blank, was screened at the South by Southwest Film Festival. The film features concert footage of Leon Russell in New Orleans and Anaheim and of the recording sessions for the album Hank Wilson's Back.
In 2015, Leon played at Virginia's Lockn' Festival and the Wildflower! Arts and Music Festival in Richardson, Texas. On September 11th, 2015, Leon Russell joined Rita Coolidge, Claudia Lennear, Chris Stainton, and other members of the 1970 Mad Dogs and Englishmen Tour for a tribute concert to Joe Cocker organized by the Tedeschi Trucks Band. Original tour photographer Linda Wolf documented the reunion and performance.
Leon Russell had a nationwide concert tour to enthusiastic crowds in 2016 and was planning to tour into 2017. The album On A Distant Shore was posthumously released in September 2017.