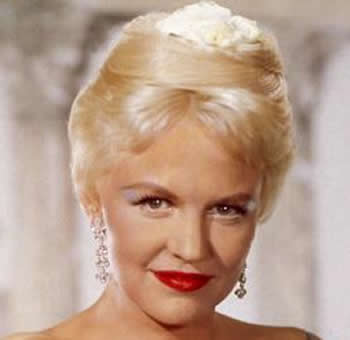 Peggy was born Norma Deloris Egstrom on 26th May 1920 in Jamestown, North Dakota, the seventh of eight children to parents Marvin Olof Egstrom, a station agent for the Midland Continental Railroad, and his wife, Selma. She and her family were Lutherans. Her father was Swedish-American and her mother was Norwegian-American. After her mother died when Peggy Lee was four, her father married a second time to Min.
Peggy Lee first sang professionally over KOVC radio in Valley City, North Dakota. She later had her own series on a radio show sponsored by a local restaurant that paid her a salary in food. Both during and after her high school years, Peggy Lee sang for small sums on local radio stations. Radio personality Ken Kennedy, of WDAY in Fargo, North Dakota, changed her name from Norma to Peggy Lee. Peggy left home and travelled to Los Angeles at the age of seventeen and was noticed by hotel owner Frank Bering while working at the Doll House in Palm Springs, California. It was here that she developed her trademark sultry purr, having decided to compete with the noisy crowd with subtlety rather than volume. Beringin offered her a gig at The Buttery Room, a nightclub in the Ambassador Hotel East in Chicago. There, she was noticed by bandleader Benny Goodman. According to Peggy Lee, Benny's then-fiancée, Lady Alice Duckworth, came into The Buttery, and she was very impressed. So the next evening she brought Benny in, because they were looking for a replacement for Helen Forrest. And although she didn't know, she was it. He was looking at her strangely, she thought, but it was just his preoccupied way of looking. She thought that he didn't like her at first, but it just was that he was preoccupied with what he was hearing. Peggy joined his band in 1941 and stayed for two years.
In 1942 Peggy Lee had her first number 1 hit, "Somebody Else Is Taking My Place", followed by 1943's "Why Don't You Do Right?", which sold over 1 million copies and made her famous. She sang with Goodman's orchestra in two 1943 films, Stage Door Canteen and The Powers Girl.
In March 1943 Peggy Lee married Dave Barbour, a guitarist in Goodman's band. Peggy Lee said that David joined Benny's band and there was a ruling that no one should fraternize with the girl singer. But she fell in love with David the first time she heard him play and so she married him. Benny then fired David, so she quit, too. Benny and Peggy made up, although David didn't play with him anymore.
When she left the band that spring of 1943, her intention was to quit the footlights altogether and become Mrs. Barbour, fulltime housewife. It's to Mr. Barbour's credit that he refused to let his wife's singing and composing talent lay dormant for too long. . "But 'Why Don't You Do Right' was such a giant hit that she kept getting offers and kept turning them down. And at that time it was a lot of money. But it really didn't matter to her at all because she was very happy. All she wanted was to have a family and cling to the children. Well, they kept talking to me and finally David joined them and said that she really has too much talent to stay at home and someday she might regret it.
Peggy drifted back to songwriting and occasional recording sessions for the Capitol Records in 1947, for whom she recorded a long string of hits, many of them with lyrics and music by herself and Barbour, including "I Don't Know Enough About You" in1946 and "It's a Good Day" in 1947. With the release of the US number 1-selling record of 1948, "Mañana", her "retirement" was over. In 1948, Peggy Lee's work was part of Capitol's library of electrical transcriptions for radio stations. An a

d for Capitol Transcriptions in a trade magazine noted that the transcriptions included special voice introductions by Peggy Lee.
In 1948 Peggy Lee joined vocalists Perry Como and Jo Stafford as a host of the NBC Radio musical program The Chesterfield Supper Club. She was a regular on The Jimmy Durante Show and appeared frequently on Bing Crosby's radio shows during the late 1940s and early 1950s.
Peggy recorded a popular version of "Fever" by Little Willie John, written by Eddie Cooley and John Davenport, to which she added her uncopyrighted lyrics ("Romeo loved Juliet," "Captain Smith and Pocahontas"). Her relationship with Capitol spanned almost three decades aside from a brief detour (1952–1956) at Decca. For that label she recorded Black Coffee, one of her most acclaimed albums and had hit singles such as "Lover" and "Mister Wonderful".
Peggy Lee continued to perform into the 1990s, sometimes confined to a wheelchair. After years of poor health, she died of complications from diabetes and a heart attack.
<<go to top>>