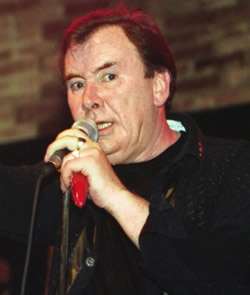 rom cancer and a succession of strokes.
He was cremated at Basingstoke Crematorium, Hampshire, U.K.
A blue plaque in his memory was unveiled in Andover High Street on 31st July 2016, marking the building where The Troggs originally rehearsed.

Reg Presley, born 12th June 1941, was the lead singer with the 1960s beat band The Troggs, whose hits included "Wild Thing" and "With a Girl Like You." He also wrote the song "Love Is All Around", which was later featured in the films Four Weddings and a Funeral and "Love Actually".
Reg Presley, whose stage name was given to him in 1965 by the New Musical Express journalist and publicist Keith Altham, was born in Andover, Hampshire. He joined the building trade on leaving school and became a bricklayer. He kept at this occupation until "Wild Thing" the Troggs first hit single, entered the UK Singles Chart in 1966. It reached No. two in the UK, and No. 1 in the US, selling five million copies.

Reg Presley wrote the hits "With a Girl Like You", "I Can't Control Myself" and "Love Is All Around". Reg Presley used his royalties to fund research subjects such as alien spacecraft, lost civilisations, alchemy, and crop circles, and outlined his findings in his book 'Wild Things They Don't Tell Us', published in October 2002.


In December 2011, Reg Presley was hospitalised in Winchester, Hampshire, with what was suspected to be a stroke. He was also suffering from pneumonia and fluid around the heart. 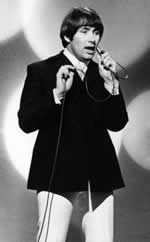 Reg Presley had suffered a major stroke about a year before. His wife said he first began to feel bad while performing in Germany on 3rd December 2011 and had got progressively worse and that doctors thought he had had another stroke.
The following month, Reg Presley announced he had been diagnosed with lung cancer and therefore decided to retire from the music industry.

song: 'I Can't Control Myself' by Reg Presley with The Troggs.