Ricky Nelson died in a plane crash, aged forty-five on 31st December 1985.
His funeral was held on 6th January 1986 and two hundred and fifty mourners entered the Church of the Hills in Los Angeles, California, U.S.A. as seven 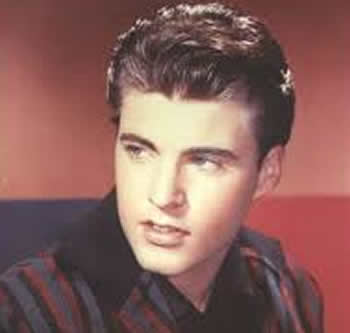 hundred fans assembled outside. Attendees included 'Colonel' Tom Parker, Connie Stevens, Angie Dickinson, and dozens of actors, writers, and musicians. Ricky Nelson was buried privately several days later in the Forest Lawn, Hollywood Hills Cemetery in Los Angeles. Ricky Nelson bequeathed his entire estate to his children.
Ricky Nelson was born on 8th May 1940, in Teaneck, New Jersey, U.S.A.. He was the second son of entertainment couple Harriet Nelson and Ozzie Nelson. His father Ozzie was of half Swedish descent. The Nelsons' older son was actor David Nelson.
The Nelsons bought a two-story colonial house in Tenafly, New Jersey, and six months after the purchase, moved with son David to Hollywood, while Ricky remained in Tenafly in the care of his paternal grandmother. In November 1941, the Nelsons bought what would become their permanent home: a green and white, two-story, Cape Cod colonial home in Los Angeles. Ricky joined his parents and brother in Los Angeles in 1942.
Ricky was a small and insecure child who suffered from severe asthma. At night, his sleep was eased with a vaporizer emitting tincture of evergreen. He was described by producer John Guedel as "an odd little kid," likable, shy, introspective, mysterious, and inscrutable.
Ricky Nelson played clarinet and drums in his teens, learned the rudimentary guitar chords, and vocally imitated his favorite Sun Records rockabilly artists in the bathroom at home or in the showers at the Los Angeles Tennis Club. He was strongly influenced by the music of Carl Perkins.
At age sixteen, Rickie wanted to impress his girlfriend of two years, Diana Osborn, who was an Elvis Presley fan and, although he had no record contract at the time, told her that he, too, was going to make a record. With his father's help, he secured a one-record deal with Verve Records, an important jazz label looking for a young and popular personality who could sing or be taught to sing. On 26th March 1957, he recorded the Fats Domino standard "I'm Walkin'" and "A Teenager's Romance" which was released in late April 1957 as his first single.
Before the single was released, he made his television rock-and-roll debut on 10th April 1957, singing and playing the drums to "I'm Walkin'" in the Ozzie and Harriet episode "Ricky, the Drummer". About the same time, he made an unpaid public appearance, singing "Blue Moon of Kentucky" with the Four Preps at a Hamilton High School lunch-hour assembly in Los Angeles and was greeted by hordes of screaming teens who had seen the television episode.
"I'm Walkin'" reached number four on Billboard's Best Sellers in Stores chart, and its flip side, "A Teenager's Romance", hit number two. When the television series went on summer break in 1957, Ricky Nelson made his first road trip and played four state and county fairs in Ohio and Wisconsin with the Four Preps, who opened and closed for him.
In early summer 1957, Ozzie Ricky Nelson pulled his son from Verve after disputes about royalties and signed him to a lucrative five-year deal with Imperial Records th

at gave him approval over song selection, sleeve artwork, and other production details. Ricky's first Imperial single, "Be-Bop Baby", generated 750,000 advance orders, sold over one million copies, and reached number three on the charts. Ricky Nelson's first album, Ricky, was released in October 1957 and hit number one before the end of the year. Following these successes, Ricky Nelson was given a more prominent role on the Ozzie and Harriet show and ended every two or three episodes with a musical number.
Ricky Nelson grew increasingly dissatisfied performing with older jazz and country session musicians, who were openly contemptuous of rock and roll. After his Ohio and Minnesota tours in the summer of 1957, he decided to form his own band with members closer to his age. Eighteen-year-old electric guitarist James Burton was the first signed. Bassist James Kirkland, drummer Richie Frost, and pianist Gene Garf completed the band. Their first recording together was "Believe What You Say".
In 1958, Ricky Nelson recorded seventeen-year-old Sharon Sheeley's "Poor Little Fool" for his second album, 'Ricky Nelson', released in June 1958. Radio airplay brought the tune notice, and Imperial suggested releasing a single, but Ricky opposed the idea, believing a single would diminish EP sales. When a single was released nonetheless, he exercised his contractual right to approve any artwork and vetoed a picture sleeve. On 4th August 1958, "Poor Little Fool" became the number one single on Billboard's newly instituted Hot 100 singles chart and sold over two million copies.
During 1958 and 1959, Ricky Nelson placed twelve hits on the charts in comparison with Elvis Presley's eleven. In the summer of 1958, Ricky Nelson conducted his first full-scale tour. By 1960, the Ricky Nelson International Fan Club had 9,000 chapters around the world.
Ricky Nelson was the first teen idol to utilize television to promote hit records. Ozzie Nelson even had the idea to edit footage together to create some of the first music videos. Ricky Nelson appeared on The Ed Sullivan Show in 1967, but his career by that time was in limbo. He also appeared on other television shows (usually in acting roles). In 1973, he had an acting role in an episode of The Streets of San Francisco. He starred in the episode "A Hand For Sonny Blue" from the 1977 series Quinn Martin's Tales of the Unexpected, known in the United Kingdom as Twist in the Tale.
Ricky Nelson worked with many musicians of repute, including James Burton, Joe Osborn, and Allen "Puddler" Harris, all natives of Louisiana, and Joe Maphis, The Jordanaires, Scotty Moore, and Johnny and Dorsey Burnette.
Ricky Nelson's music was very well recorded with a clear, punchy sound—thanks in part to engineer Bunny Robyn and producer Jimmy Haskell.
From 1957 to 1962, Ricky Nelson had 30 Top-40 hits, more than any other artist except Elvis Presley, who had 53, and Pat Boone , who had 38. Many of Ricky Nelson's early records were double hits with both the A and B sides hitting the Billboard charts.
While Ricky Nelson preferred rockabilly and uptempo rock songs, his smooth, calm voice made him a natural for singing ballads.
<<go to top>>