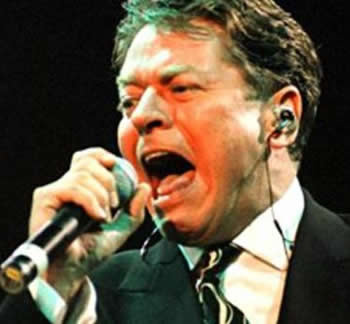 ul balladeering. He repeated his previous success of "Addicted to Love" with the video of "Simply Irresistible", again with a troupe of female "musicians". The song reached number 2 in the US and was Robert Palmer's final Top Ten hit there. The ballad "She Makes My Day" also proved to be a hit in the UK, peaking at number 6. In 1989, he won a second Grammy for "Simply Irresistible", which would later be featured in the Tony Award winning musical Contact. At the 1989 Brit Awards, Robert Palmer received his second nomination for Best British Male, and "Simply Irresistible" was nominated for Best British Single. Rolling Stone magazine voted Robert Palmer the best-dressed rock star for 1990.
Robert Palmer expanded his range even further for his next album, Don't Explain in 1990. It featured two UK top 10 hits with covers of Bob Dylan's "I'll Be Your Baby Tonight" a collaboration with UB40 and Marvin Gaye's "Mercy Mercy Me". Throughout the 1990s, Robert Palmer ventured further into diverse material. The 1992 album Ridin' High was a tribute to the Tin Pan Alley era.
In 1994, Robert Palmer released 'Honey' to mixed reviews. While the album failed to produce any hit singles in the US, he did find success in the UK with the release of three modest hit singles "Girl U Want", "Know by Now" and "You Blow Me Away".
In 1995, Robert Palmer released a greatest hits album, which reached number four in the UK. In 1995 he reunited with other members of Power Station to record a second album. Bassist John Taylor eventually backed out of the project, to be replaced by Bernard Edwards. Robert Palmer and the rest of the band completed the album Living in Fear in 1996.

song:'Addicted to Love' by Robert Palmer