Tom Petty died aged sixty-six at the University of Califo 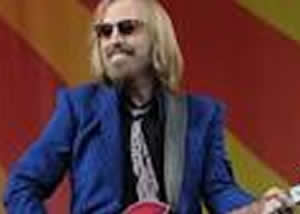 rnia-Los Angeles' Santa Monica hospital, U.S.A.. He was found unconscious at his home, not breathing and in full cardiac arrest early in the morning of October 2, 2017. His death was prematurely reported by media outlets that afternoon, although the initial reports were retracted after the Los Angeles Police Department announced that it had inadvertently indicated his death to the media without confirming but Tom's death was confirmed later that evening by his family and manager.

Born on October 20th 1950 in Gainesville, Florida, USA, to Earl and Kitty Petty, Tom Petty was the first of their two sons. Tom's initial interest in rock and roll music was catalysed when he was just eleven years old and had the amazing good fortune to meet Elvis Presley. During the summer of nineteen-sixty-one, Tom's uncle had been working on the set of the Elvis film 'Follow That Dream' in nearby Ocala. He invited his nephew to drop in and watch the film-shoot. Tom was to become an instant Elvis fan. When twelve years old his parents gifted him his first acoustic guitar as a Christmas present.
Tom Petty is known to have stated that he knew he wanted to be in a band the moment he saw the Beatles perform on an Ed Sullivan Show. He quickly dropped out of high school at age seventeen to play bass with a newly formed band.
Don Felder was one of Tom's first guitar teachers who at that time also lived in Gainesville and who later became a member of the Eagles. Tom Petty, when still a young man worked for a short time on the grounds crew for the University of Florida, but he was never to became a student there. He also worked briefly digging graves.
Tom Petty triumphed over a fractuous relationship with his father, who had difficulty in accepting that his son was mild-mannered and interested in the arts. He subjected Tom to verbal and physical abuse frequently. Tom was however very close to his mother, and also remained close to his brother, Bruce.
Tom Petty got married to Jane Benyo in 1974 but they got divorced i 1996. They had two daughters, Adria, director and AnnaKim, an artist. Tom married Dana York Epperson in 2001. This union gave him a stepson, Dylan, from her earlier marriage.
Tom Petty started a rock band known as the Epics which later evolved into a and called Mudcrutch. Although this band, which featured future Heartbreakers Mike Campbell and Benmont Tench, were popular in Gainesville, their recordings did not attract the attention of a mainstream audience.
After Mudcrutch split, Tom rather reluctantly agreed to pursue a solo career. Tench chose to form his own band, whose sound Tom did appreciate. Eventually, Tom and Campbell collaborated with Tench and fellow members Ron Blair and Stan Lynch, resulting in the initial lineup of the Heartbreakers. Their eponymous debut album gained miniscule popularityin the U.S.A. but achieved greater success in the U.K. The single "Breakdown" re-released in 1977, peaked at number forty during early 1978 after the band toured the United Kingdom in support of Nils Lofgren. Their debut album was released by Shelter Records, which at that time was distributed by ABC Records.
Their second album, You're Gonna Get It!, was the band's first Top forty album and featured the singles "I Need to Know" and "Listen To Her Heart". Their third album, "Damn the Torpedoes", rapidly went platinum, selling almost two million copies; it includes the breakthrough singles "Don't Do Me Like That", "Here Comes My Girl" and "Refugee".
During September of 1979, Tom Petty and the Heartbreakers performed at a Musicians United for Safe Energy concert at Madison Square Garden in New York. Their rendition of "Cry To Me" was featured on the resulting album called 'No Nukes'.
Bass player Ron Blair quit the group and was replaced on the fifth album by Howie Epstein. The resulting line-up would last until 1994. In 1985, the band participated in Live Aid, playing four songs at Philadelphia's John F. Kennedy Stadium. 'Southern Accents' was also released in 1985, an album which included the hit single "Don't Come Around Here No More", produced by Dave Stewart. The song's video featured Tom Petty dressed as the Mad Hatter, mocking and chasing Alice from the book, Alice's Adventures in Wonderland, then cutting up and devouring her as if she were a cake. The ensuing tour led to the live album 'Pack Up the Plantation: Live!' and to an invitation from Bob Dylan.Tom Petty and the Heartbreakers joined him on his True Confessions Tour. They also played some dates with the Grateful Dead in 1986 and 1987. Also in 19

87, the group released 'Let Me Up (I've Had Enough') which includes "Jammin' Me" which Tom wrote togther with Bob Dylan.
In 1987 an arsonist set alight Tom Petty's house in Encino, California. Firefighters were able to save the basement recording studio with it's original recording tapes stored there, plus Tom's Gibson Dove acoustic guitar. However Tom's signature grey top hat was destroyed. Tom Petty later rebuilt the house with fire-resistant materials.
In 1988, Tom Petty joined the Travelling Wilburys, which included George Harrison, Bob Dylan, Roy Orbison, and Jeff Lynne. The band's first song, "Handle With Care", was intended as a B-side of one of George Harrison's singles, but was judged too good for that purpose and the group decided to record a full album, Travelling Wilburys Vol. 1. The second Wilburys album, titled Travelling Wilburys Vol. 3 and recorded without the recently deceased Roy Orbison, followed in 1990. Tom Petty included Travelling Wilburys songs into his own live shows.
In 1989, Tom Petty released Full Moon Fever, which featured hits "I Won't Back Down", "Free Fallin'" and "Runnin' Down a Dream". It was his first real solo album, although several Heartbreakers and other well-known musicians helped.
Tom Petty and the Heartbreakers reformed in 1991 and released 'Into the Great Wide Open', which was co-produced by Jeff Lynne and included the hit singles "Learning To Fly" and "Into The Great Wide Open", the latter featuring Johnny Depp and Faye Dunaway in the music video.