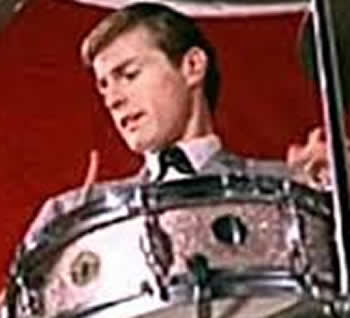 <<go to audio control>>
Tony Meehan died aged sixty-two on 28th November 2005 at St Mary's Hospital, Paddington, London, U.K. as a result of head injuries, following a fall down the main staircase at his flat in Maida Vale, West London. Tony Meehan was married twice and had fathered seven children.
As the drummer with the Shadows, Tony Meehan helped to lay the foundations for British rock’n’roll, both backing Cliff Richard and on a long string of instrumental hits recorded under the group's own name. John Lennon once claimed that before Cliff and the Shadows, there had been nothing worth listening to in British music. As the first backing band to emerge as stars in their own right, they were early trailblazers for the beat-group boom that eclipsed them. Tony Meehan was born to Irish parents in London, U.K. He was ten years old when he became interested in playing drums. By age thirteen he had his first job with a band playing in a dance hall at Willesden, London. He also played timpani with the London Youth Orchestra. When he was fifteen Tony Meehan was set on becoming a lawyer but he was offered a job at £25 per week in a touring show. He was given six months' holiday. The tour never materialised but he did not go back to school. Unlike other members of the Shadows he was never short of work, playing cabaret .

at Decca Records. He teamed again with Jet Harris (who had also left the Shadows and moved to Decca) and as a duo had success with the instrumental "Diamonds" which also included Jimmy Page on acoustic rhythm guitar. "Diamonds" was a number one hit in the UK. Harris and Tony Meehan had two further hit singles together – "Scarlett O'Hara" and "Applejack".

On 1st January 1962, the Beatles were auditioned at Decca by Tony Meehan, performing a selection of covers they had performed in various clubs over the years, interspersed with three Lennon–McCartney originals. The Beatles later found out that their manager Brian Epstein had paid Tony Meehan to produce the recordings made that day in order for the Beatles to retain ownership of the tapes. Decca rejected the Beatles choosing the Tremeloes, who auditioned the same day as the Beatles.

Tony Meehan quit the music industry in the 1990s for a major career change as a psychologist, as a result of his lifelong hobby and interest. He worked in London at a local college lecturing in psychology until his death. He was also a regular churchgoer at his local Roman Catholic church in Maida Vale.