Ray Sawyer died aged eighty-one on 31st December 2018 at Daytona Beach, Florida, U.S.A. He is survived by his wife, Linda, and son, Cayse. 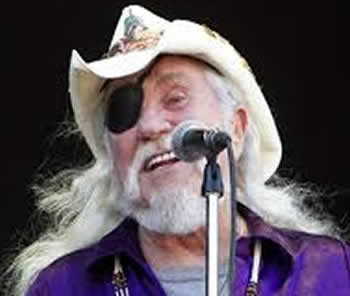 Ray was born on 1st February 1937 at Chickasaw, Alabama, U.S.A. He lost his right eye in an automobile accident in 1967. He said that, around the time of his accident, he must have played all the clubs from Houston to Charleston until he decided he was going insane from too much beans and music, and he gave it up. Then he saw a John Wayne movie and travelled to Portland, Oregon, to be a logger complete with plaid shirt, caulk boots, and pike pole. On the way his car slipped on the road and the accident left him with the eye patch he then wore. When he recovered he ran straight back to the beans and music and vowed that there he'd stay'. As Dr. Hook, Ray had many hit singles such as "Sylvia's Mother", "The Cover of Rolling Stone", "A Little Bit More", "Only Sixteen", "Walk Right In", "Sharing the Night Together", "When You're in Love with a Beautiful Woman", "Better Love Next Time", "Sexy Eyes", "Girls Can Get It", and "Baby Makes Her Bluejeans Talk".

Though primarily a backing vocalist and occasional percussionist on congas or maracas, Ray sang lead on the hit song "The Cover of Rolling Stone" and was a recognizable presence in the band owing to the eyepatch and cowboy hat he wore. He was also the uncle of the vocalist of Wild Fire; Zack Sawyer.

Ray Sawyer was inducted into the Alabama Music Hall of Fame in 2005.

you like this website? If so, then please copy and email link:
http://www.rockapaedia.com
to your friends, colleagues and aquaintances. Thank you..