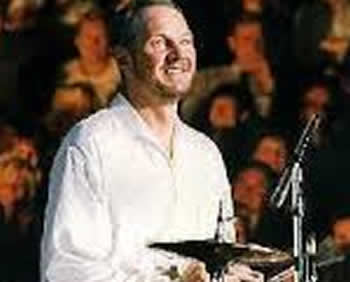 Ian Russell Wallace died aged sixty from esophageal cancer on 22nd February, 2007 in Los Angeles, California, U.S.A. Ian was survived by his wife, Marjorie.
Ian Russell Wallace was born in 1946 in Bury, Lancashire, U.K. and formed his first band, The Jaguars, whilst at school, before going on to join The Warriors with Jon Anderson in his pre-Yes days. From The Warriors, Ian went on to join Big Sound, who, in the 1960s, worked in Denmark, Norway and Sweden. When the Big Sound split at the end of 1967 during a tour of Norway, some members, including Ian Russell Wallace, moved to London to back other artists such as Sandie Shaw, David Garrick, Marv Johnson and Lou Christie.
Ian later joined Viv Stanshall's BiG GrunT, and then The World with Neil Innes before joining King Crimson. Ian subsequently worked with Steve Marriott's All-Stars and was invited to joi

n Bob Dylan's band in 1978 and accompanied Bob Dylan during a tour of Japan. Ian Russell Wallace's heavy drum style was the driving force behind the pop-heavy Dylan album Street-Legal. Ian toured again with Bob Dylan in the early 1990s and in 1977 he worked briefly with Foreigner.
Following a move to Nashville, Tennessee, U.S.A. in 1998, Ian Wallace worked as a producer and in 2003, he joined the 21st Century Schizoid Band, and released his only solo album, 'Happiness With Minimal Side Effects'.
In 2005 he formed the Crimson Jazz Trio with Tim Landers on bass and Jody Nardone on piano, which released King Crimson Songbook Volume One in November 2005 and King Crimson Songbook Volume Two in early 2009.